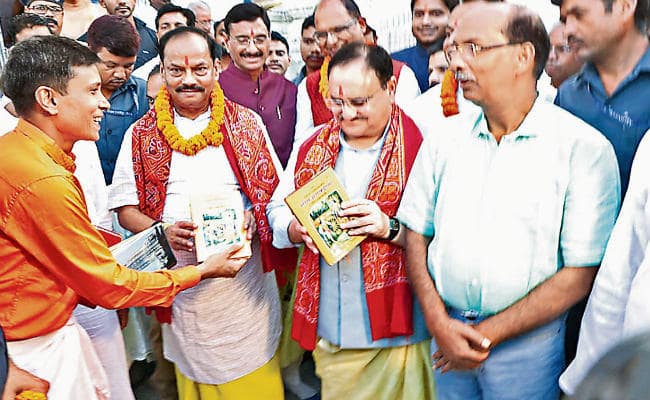 Narendra Modi Government is planning to benefit tribals by introducing Van Dhan Yojna. This scheme aims to promote forest products, their maintenance, storage, sale and purchase in order to increase the income of tribals who were living in forest areas.

These facts came to light in a meeting of the BJP's Jharkhand unit Scheduled Tribe Morcha in Lohardaga on Saturday. The meeting attended among others by CM Raghubar Das and Union Tribal Affairs Minister Arjun Munda was presided by BJP President J.P.Nadda.

Their meeting assumes significance since the state Assembly polls are expected to be held in this state before the end of 2019. Addressing the meeting, Nadda lambasted opposition parties-Congress and JMM.

"Beware of these parties. They miss no opportunity to show crocodile tears for Adivasis. For decades, these parties have done nothing for them other than making false promises", BJP chief said.

"The Congress targeted BJP, its government and put up blockades in serving tribals who had struggled for a separate state of Jharkhand.BJP government led by Atal Bihari Vajpayee created Jharkhand state. Now, the time has arrived to finish Congress and JMM", said Nadda.

Nadda pointed out that BJP stands on strength of its party workers and sought to energize them by stating that the party's aim was to gain victory not only in Jharkhand but also in Tamil Nadu, Odhisa and West Bengal.

"Work by getting linked with the ground. Many other parties were based on dynasty and families. However, BJP stands in the support of workers", he opined.

Talking about the abrogation of Article 370, he said it was necessary to link it with the mainstream of the country."In the past, this Article helped only three families. After its abrogation, it will benefit its people", said Nadda.

Nadda also addressed a party meeting of Booth workers in Gumla. During the meeting, ID cards were handed over to Booth level workers.

Both meetings were addressed by Das and Munda. In his speech, Munda said that under the leadership of PM Narendra Modi, tribals have acquired the right to own land in J&K.

Further, Munda disclosed that Eklavya Vidyalaya(Single-Teacher school) will be set up for tribal children where they will get facilities of education and sports as well. "To ensure Adivasis benefit from the forest, our government is coming up with Van-Dhan Yojna", disclosed Munda.

During his address to workers, Das claimed that the grand old party was affected by intra-party feud. Appealing to people to wipe out Congress and JMM that flourished on grounds of a dynasty, Das said that these parties were meant for families, functioned in the name of tribals whereas the BJP has been working for the uplift of all sections of the society.