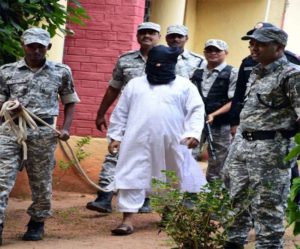 An investigation by the police revealed that he moved from place to place, mobilized youth and sent them abroad to train them to indulge in violence for religion.

Maulana Kalimuddin Mujahiri, who was arrested by the Anti- Terrorist Squad(ATS) of Jharkhand Police on a tip-off from intelligence wing of the government in Jamshedpur on Saturday, was alleged to be Al-Qaeda operator.

According to investigators, Mujahari was involved in mobilizing and getting Sunni Muslim youths linked with international terror outfits and sleeper cells in India,FIR filed at Bishtupur Police station on January 25, 2016, against Kalimuddin states. Ever since then, he was wanted by the ATS.

His interrogations by the ATS sleuths revealed that Kalimuddin identified eligible Muslim youths and encouraged them to pick up guns for their religion.

A. Vijay Laxmi, SP, ATS, confirmed that his link with Al-Qaeda was almost clear. He had visited South Africa, Bangladesh and parts of Saudi Arabia several times, said Laxmi."More facts are being gathered to record his method of work and his links."`