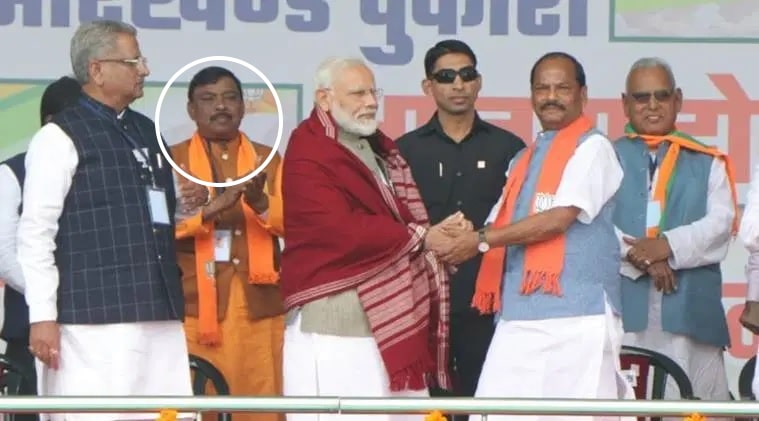 *Seen in the picture is Shashi Bhushan Mehta(second man from Left) who stands behind PM Modi and CM Raghubar Das shaking hands on the dias in Gumla.

When Prime Minister Narendra Modi addressed a rally in Gumla today, claiming that farmers of Jharkhand were getting 'double benefits' due to the policies of the BJP government in the state and at the center, a prime accused of the murder of a widow, school teacher, stood right behind him.

Shame! You might scream. But the fact is that the post- mortem conducted on the victim teacher Suchitra Mishra, a widow, revealed that she was pregnant when a vehicle had crushed her to death in Ranchi.

This accused man of her murder is Shashi Bhushan Mehta. He stood on the dais of the BJP election rally in Gumla on Monday, right behind the PM Modi as BJP's candidate from Panki in Palamau district.

Police records show that Mehta, who is the prime accused in the Suchitra Mishra murder case, was out of jail on bail.

Her son Abhishek Mishra had knocked the doors of Home Minister and BJP President Amit Shah, seeking justice. For that, his letter gave details of the shocking murder case of his mother. Result?

Today, while Mehta stood behind the CM Raghubar Das and PM Narendra Modi, Abhishek Mishra was in tears."I had never imagined that he will get linked with our beloved Prime Minister Narendra Modiji."

"These BJP leaders have exposed themselves to the charge that they were heartless and backers of a merciless criminal," cribs an activist who does not want to get named.

Also, scores of BJP workers seem to be upset. This was one of the reasons why Anant Pratap Dev, a former MLA from Bhawanthpur constituency, had quit the BJP and joined the All Jharkhand Students Union (AJSU).

Yet, the CM and the PM appeared upbeat. Mr Modi said that his government will provide water to every household in the country by 2024. More, he said that farmers of the state are getting double benefits due to the policies of the BJP government in the state.

“The result of the double engine of BJP governments in Delhi and Ranchi is that today, the farmers of Jharkhand are getting double benefits. Every farmer family here gets direct help under PM-KISAN, along with additional benefits of Chief Minister Krishi Aashirwad Yojana,” the PM said.

Results of the election to 81 seats in the state Legislative Assembly will be declared on December 23.