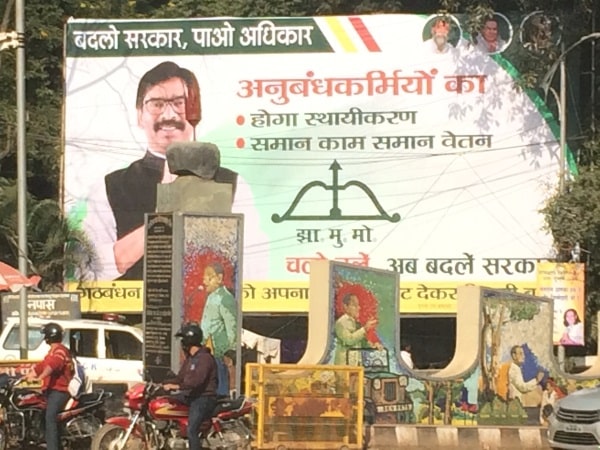 With the first phase of Assembly polls slated to be held in Jharkhand by the end of this month,the battle of ballets between the ruling BJP and the opposition JMM,Congress and Jharkhand Vikas Morcha has started picking up momentum in the state.

In the first phase of polls on November 30,a total of 189 candidates are in the fray for 13 of the total 81 Assembly seats in Jharkhand.All these seats fall in Naxal affected areas of the state.

The BJP led by Chief Minister Raghubar Das is using national issues such as Kashmir,Ayodhya,corruption-free government,use of Direct Benefit Transfer of scholarships,agriculture and pension funds to students, senior citizens and farmers,and Ayushman Bharat.However,most pictures on bill boards and slogans of the party centre around Prime Minister Narendra Modi and Chief Minister Raghubar Das who was declared as the CM again if the BJP is voted back to power.

Alongsside,the opposition comprising Congress,JMM and JVM appear to be using local issues;poor governance of the BJP led by the CM Raghubar Das,unemployment,miss use of public funds on 'investors submits',deaths of poor farmers,lack of doctors,nurses and medicines in hospitals and schools.The bill boards put up by the Congress reads a slogan:"Congress Aa Rahi Hai..."(Congress is coming...).

The arch-rival of the BJP is JMM. In its manifesto, the JMM has promised to provide jobs to unemployed youths, irrigation water to farmers and contain law and order. In the billboards put up main roads in Ranchi,the party carrying the picture of its acting president Hemant Soren has a slogan:BJP isbar Jharkhand Paar(Send BJP out of Jharkhand this time)Another billboard reads: Anubaandh Karmiyo Ka:Hoga Sthaikaran(Contractual employees will get regularised); Saman Kam, Saman Vetan(Similar Work, Similar Salaries). These promises were made to thousands of school teachers, staff, nurses, and doctors who were working on a contractual basis).

Notably, Raghubar Das, who is the first CM in the 19-year-old state of Jharkhand to complete a five-year term and who has gained confidence of the PM Modi and Amit Shah has gone on record reiterating the BJP's target for the Assembly polls results-"Abki Baar 65 Par"(This time the BJP will cross 65 seats-in 81 member house). Though poll results are scheduled to be declared on December 23, pollsters in common predict a hung assembly. In 2014, the BJP had gained for the first time majority-43 out of 81 seats.