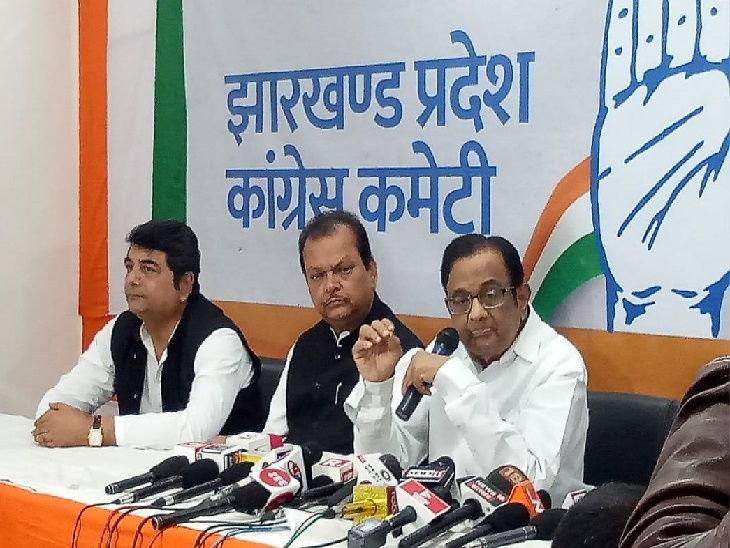 Landing in Ranchi after coming out of the Delhi based Tihar jail on bail in the INX Media money laundering case lodged by the Enforcement Directorate,ex-Finance Minister P.Chidambaram blasted the 'Double Engine' government, ahead of the second phase of Assembly polls in Jharkhand on Saturday.

In this second phase, polls are being held in 20 Assembly constituencies where 260 candidates were in the fray. Security forces were deployed in strength to hold peaceful and fair polls.

Talking about the economic slowdown, he criticized the BJP government led by Prime Minister Narendra Modi, saying it is not even aware of the cause of the current economic crisis.

He went on to state that both the governments at the Centre and in the state were in command of incompetent leaders. In reply to a question on Hyderabad's' encounter' case of four alleged rapists-murderers, he said, though he was not having full details of the case, he sought a thorough probe into it.

Chidambaram, who  addressed media persons in Jharkhand capital on Friday, pointed out that in the recently held Maharashtra and Haryana Assembly elections, the people had rejected BJP."As far as unemployment of the youths is concerned, Jharkhand figured in the top four of the list of states in the country.

"If the Congress and its allies win and formed the government, every house will get one job", promised Chidambaram. In the press conference, he was accompanied by Congress state unit In-charge R.P.Singh and ex-Union Minister Subodh Kant Sahay.