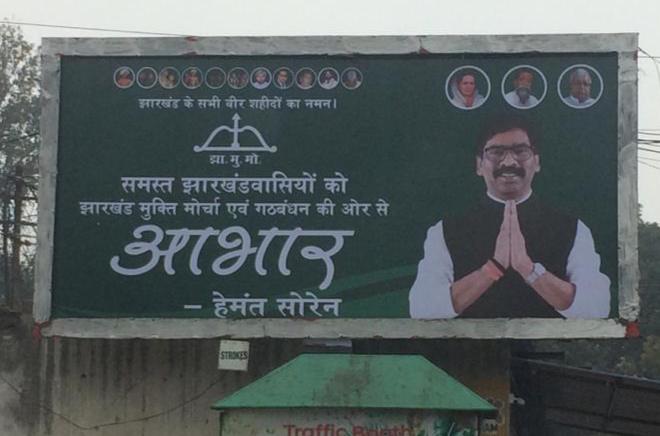 "Abhar"(Indebted to you), reads a billboard. The billboard was put up along the roadside in Ranchi with a picture showing Hemant Soren offering Pranam on behalf of his party JMM led coalition in Jharkhand.

In fact, ever since December 23 afternoon when the Assembly poll results went against the BJP and opened the door for setting up a coalition government comprising JMM, Congress and RJD, Soren, who is scheduled to take oath as CM of the state for the second time, has been busy saluting leaders and gaining their blessings.

Among those who had blessed him included his father Shibu Soren,ex-CM and Jharkhand Vikas Morcha chief Babulal Marandi and BJP rebel turned Independent MLA, Saryu Rai. Behind his blessings seeking move, Hemant Soren has displayed statesmanship by declaring to withdraw the FIR he himself had filed against Raghubar Das, alleging that he had abused him and thereby hurt his sentiments. He has also promised to carry forward 'good schemes' of the previous BJP government.

At the same time, the move is learnt to be on to select top civil servants as Chief Secretary and DGP. Among those whose names figure in corridors of power are Sukhdeo Singh as CS and M.V.Rao as DGP.

."All such names are rumors. A final decision will be taken by the new government after the oath-taking function ends on December 29", said a JMM leader close to Hemant. Also, Saryu Rai and Hemant Soren are expected to use the anti-corruption wing of the state government to inquire into an old case connected with Singapur based company.