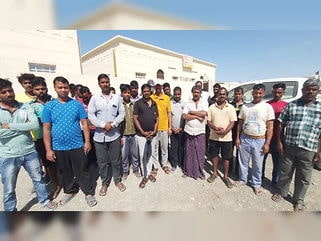 With Chief Minister Hemant Soren seeking justice for 40 Jharkhand based workers, Foreign Minister Dr 'S. Jai Shankar and Indian Embassy in Oman have got in touch with them.

" We are in touch with the workers. We are confident to get them justice", a staff of Indian Embassy in Oman has said.

Though the identity of these workers was not available, they were from Hazaribagh, Koderma, Giridih and Bokaro. They had gone to Oman to work for a private company.

By posting their photographs to their family members and then to Oman Embassy ( published above) and alleging that while they were working for the company since 2016, they have not been paid any wage during the past seven months.

"During 24 hours in one day, we are given food once. We are like prisoners", one of these workers had informed his parents seeking justice.

"When we demand wage payment from the company, we are threatened", a member of the Immigrant group in Oman is quoted having said in local Hindi Daily- Dainik Bhaskar, Ranchi.

Their message was sent to the Indian Embassy and Ministry of Foreign Affairs. When CM Soren learnt it on Friday, he is learnt to have contacted the Foreign Affairs Ministry and sought justice for these workers.

With the Ministry of Foreign Affairs intervening and the Indian Embassy of Oman getting in touch with them, parents and relatives of these unfortunate workers can be expected to get freedom and salaries as well.