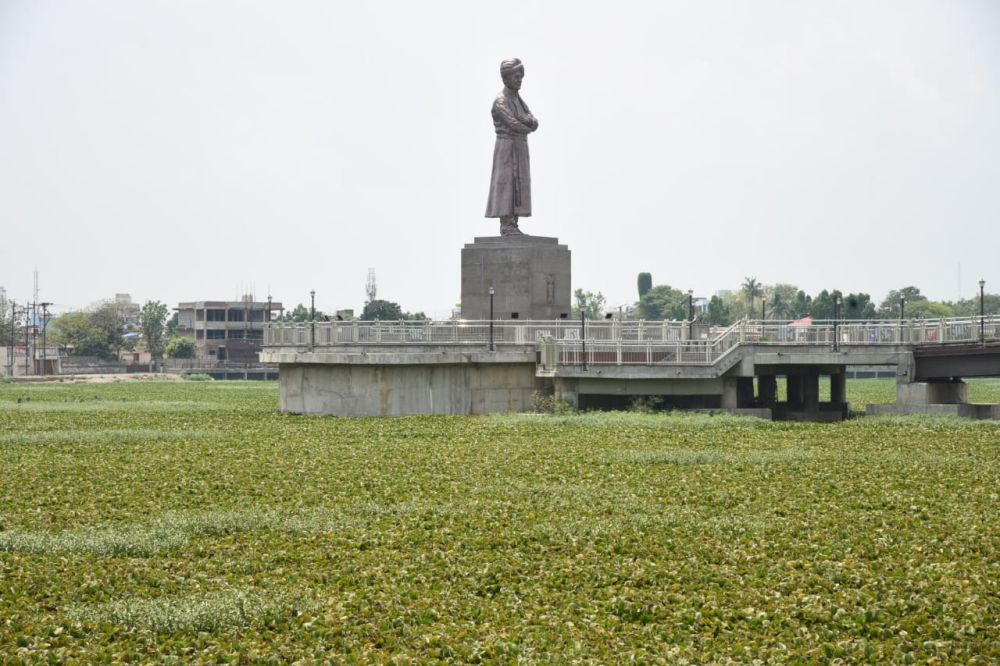 *All pictures by renowned photojournalist of Jharkhand Manoj Srivastava.

If only crores of rupees of public funds spent in the name of 'development' of  Ranchi lake could be photoshopped.

In any case, today this lake, widely known as Bada Talab, spread over 52 acres in the heart of the state capital, is a huge storehouse of a highly problematic invasive species- hyacinth. These green hyacinth has enveloped the entire water body, east, west, south and north, almost two-three years after the previous government led by Chief Minister Raghubar Das spent more than  Rs 10 crore on 'development' and 'beautification' of this historical lake.

"It's a shame. Inquiry by a judicial committee must be undertaken to evaluate how much public funds were spent to develop this lake of hyacinth", said Ravi Kumar, Ex CBI Dy.SP echoing the demand of more than a dozen citizens www.jharkhandstatenews.com talked to.

Records revealed that people of Purani Ranchi-Kishore Gunj, Gadikhana located right near the lake, suffered from the flood caused by water gushing down from Ranchi hill during monsoon and faced water scarcity during summer. To deal with these dual problems, a British Colonel Onsely used prisoners. They dug up the lower parts of the hill and constructed the pond. This was more than in 1842.

More than a century later, the BJP government led by Raghubar Das government spent more than 8 crores on its development project during 2016-19. The project comprised the construction of a boundary wall around the pond, sewage, cleanliness, lightening bridge and installation of the 33-feet tall statue of 22-feet figurine of Swami Vivekananda with 142 pillars. The CM Das unveiled the statue worth 17 crores on January 12, 2019.

Almost one-and-half --year later, the lake is wearing its new dirty look. Used plastic, kitchen leftovers and hyacinth were spread over its water all around. Even the surface of Swamy Vivekananda's statue was packed with hyacinth. Ask any officers of the state government why this historic lake and Swamy Vivekananda's statue was so dirty and filthy and pat comes the reply, the process of 'development' continues.

RMC Mayor Asha Lakra blames the people."I am surprised at how people throw garbage near the lake."Meanwhile, Jalkumbhi appears to be spreading thick and fast in Bada Talab and the statue of Swamy Vivekananda mirrors 'development' of Ranchi lake- a fine outcome of corruption and incompetence in Jharkhand.