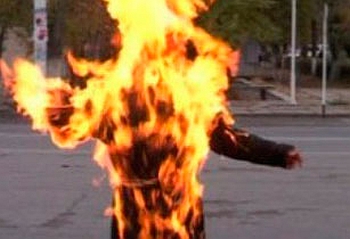 The arrest of Uttam Mahato in Angara today revealed that the student of Ranchi woman’s College was gang raped by four persons before she committed self immolation on Wednesday.

She was declared at the state government run RIMS hospital the same day.

Divya(name changed to protect identity) was an undergraduate student.In a statement recorded by the police before her death,she said that she was in love with Preet Ranjan Prasad.On March 17,when she was returning home,Preet called her and asked her to come to a place in Angara,21 km from Ranchi.

“I went there.Preet kept me there for an hour and half.His three friends were hiding some where.Subsequently,he left me there and escaped.Then,three of his friends caught me and raped me one after another.Later,Preet came and he too raped me.

He also dubbed me as a prostitute.Then they all left me there and fled.Some how I reached home at 8 pm.I felt now there is nothing left in life.So,on Wednesday morning, I sprinkled kerosene oil and set myself afire”,said Divya in her statement minutes before breathing her last.

A team of police personnel had left for Chakradharpur to bring him to justice.”They will be nabbed very soon”,said SP(Rural) Vikrant Minz.