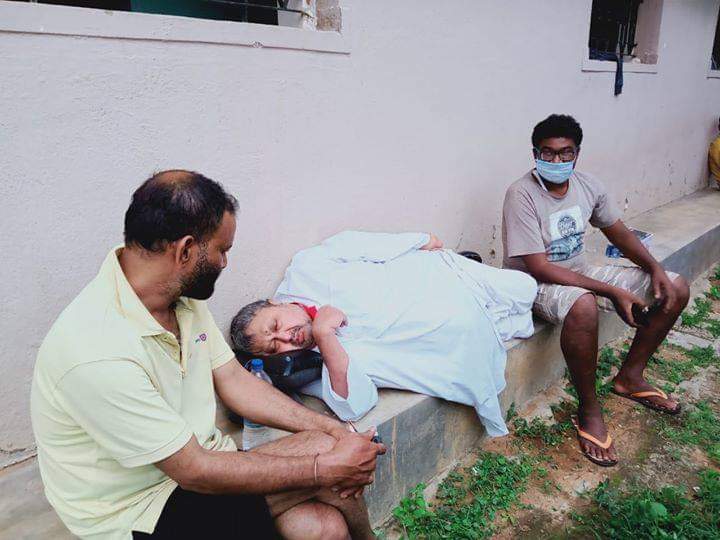 Picture Shows IAS (Retired)officer and former Chief Secretary of Jharkhand Sajal Chakraborty who was undergoing imprisonment in multi-million rupee fodder scam ( middle), lying on a catchment of the floor of the yet to be identified building.

Undergoing imprisonment in multi-million rupee fodder scam(68 A), former chief secretary of Jharkhand, Sajal Chakraborty was spotted sleeping on a catchment floor of a cemented building.No body knows where lies this building and who were two men sitting beside him.

Chakraborty who is Bihar turned Jharkhand cadre IAS officer of 1981 batch had been suffering from multiple diseases including depression, asthma, and thyroids.

Incidentally, none of the two officers of the state jail administration in Jharkhand the www.jharkhandstatenews.com contacted talked about the whereabouts of Chakraborty.

However, this picture was received on the WhatsApp group. It was posted by Kishore Mantri, a well-known member of the Federation of Jharkhand Chamber of Commerce and Industries.

When asked  from where did he get the picture, he replied that he had received it from a friend in Khunti.”I don’t know anything more than this”, replied Mantri who is a businessman in Ranchi.

As per official records, the Special CBI Court had held him guilty, convicted him, and announced a sentence of five years on November 23, 2017.

Soon, on health ground, he was shifted from Ranchi Central jail to RIMS hospital’s prisoners’ ward. On January 10, 2018, RIMS’ psychiatrist Dr. Ashok Prasad who was treating him as a patient of depression said that since he was physically and mentally unfit to be kept in ICU, Medicine ward or Prisoners’ ward, he should be shifted to mental institute -RINPAS, Ranchi.

Subsequently, on the basis of the medical review report and recommendation of the RIMS Cardiologist and Psychiatrist, the jail administration shifted him from RIMS hospital to RINPAS, Ranchi.

The message is simple. As you sow, so will you reap.