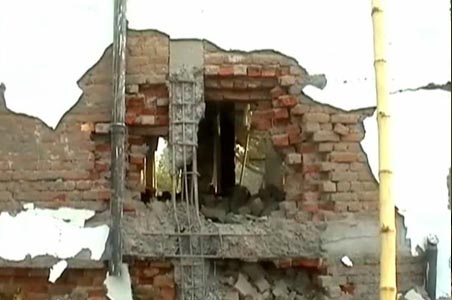 Debris of a newly built house lie scattered all around,the scene of Friday night land mine explosion trigerred by the CPI(Maoist) cadres at Jamunia village under Nawadih police station in Bokaro district.

There was no casualty.The house was constructed by Phool Chand Manjhi alias Prabil Da,former Area Commander of the CPI(Maoist).

Reports said that the Prabil Da was dubbed as a traitor by the Maoists who had reduced his house to rubbles.Reason?

”Pravil Da had collected a huge sum of levy and decamped with it”,said a report quoting the Maoists.

The police have not lodged any FIR till now.