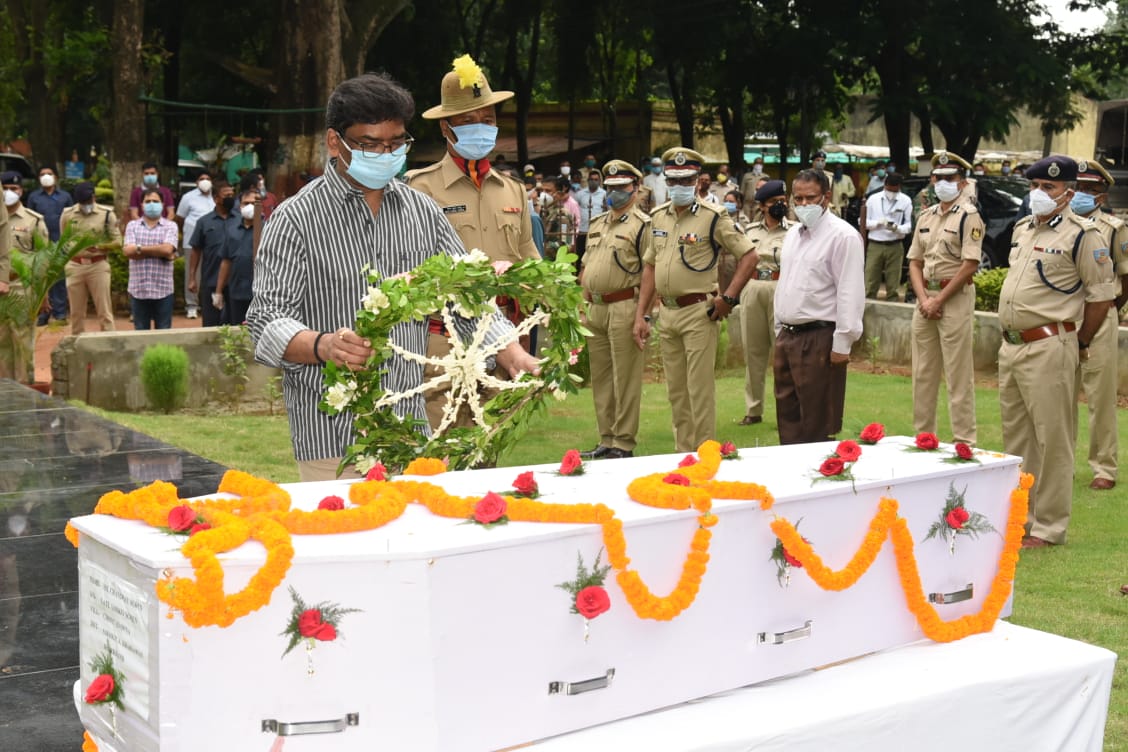 When his body was lying in white sheets and flowers, his wife stood nearby in tears. And CM Hemant Soren consoled her. Also, he saluted late ASI Chandrai Soren,43, inside Jharkhand Armed Police-1 premises on Sunday.

It was part of an honourable funeral function organised by the state police to posthumously honour Assistant Sub Inspector of Borio Police station in Sahebgunj. This ASI had got hit in an exchange of fire with extremists more than two weeks ago.

Finally, he succumbed to a fatal bullet injury in the upper part of his stomach in a private hospital in Ranchi on Saturday.

The state police had organised his funeral to pay tribute to him. The brain behind the show was CM Soren who stood behind him and paid tributes to him.

The story of this ASI’s death is nearly three weeks old. Arun Shah, a famous businessman of Santhal Pargana, was kidnapped.

On June 27, a team of policemen including Chandrai Soren, acting on a tip-off, launched a search operation. As they reached an isolated area of Barhet, a newly emerged extremist outfit called ‘National Santhal Liberation Army’ armed men opened fire.

Chandrai had received a bullet injury. He was airlifted, brought to Ranchi, and admitted at a private hospital where he passed away on Saturday night.

Prior to this NSLA had mercilessly murdered Shah on charge of not paying a ransom sum of Rs 30 lakh. The police claim to have arrested the accused and sent them to jail on judicial remand.

Though the family members of Shah were in a state of shock and grief and reportedly planning to shift to safer zone out of Sahebgunj, late Chandrai family headed by his wife appeared to be thankful to the CM for providing him honourable funeral function.