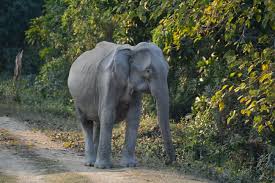 Jharkhand Forest Department and Wildlife officials have rescued a 40-year-old elephant who  was allegedly forcefully fed alcohol "by her abusive owners to keep her under control and use it for begging",reports News 19.

Named Emma,the rescued elephant,currently busy dispatching her to the elephant Conservation and Care Centre run by Wildlife SOS on the Agra-Mathura border where she is reportedly being treated.

Emma was used by owners who used it to beg money.Now,the Jharkhand Forest Department has booked the owners on charges of violation of wildlife laws and severe neglect.

"The elephant was trafficked and forced to walk over 300 miles across the state borders into Jharkhand",News 18 TV reports quoting a Jharkhand Forest Department officer..

News 18 further quotes Vets at the centre saying ,"Due to years of abuse, Emma suffered from painful and chronic osteoarthritis condition, degenerative joints disease, footpads embedded with sharp glass, metal and stone fragments. Decades of malnourishment has deteriorated her health and left her fragile."

"The elephant was regularly used for begging, religious procession, wedding ceremonies, tourist rides, and other activities that her owners found to be lucrative. At night, she was tightly restrained, preventing her from lying down and resting. She was fed an unhealthy diet of sweets and fried foods that left her immunity and health severely compromised",News 18 states.