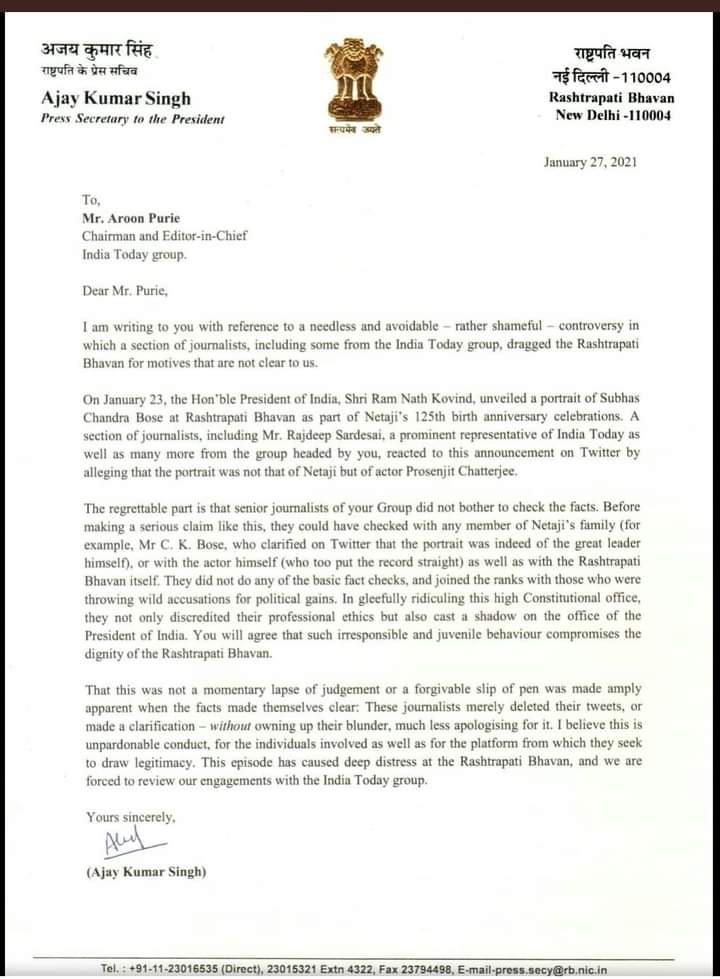 A section of journalists including some from the India Today Group are in the line of fire. Reason?
They dragged the Rashtrapati Bhawan for motives that is not clear to Ajay Kumar Singh, Press Secretary to the President.

In a letter( enclosed with this story ) dated a January 27, to Mr Aroon Purie, Singh has informed that President Sri Ram Nath Kovind had unveiled a portrait of Subhash Chandra Bose at Rashtrapati Bhawan as part of Netaji’s 125th birth anniversary celebration.

A section of journalists, including Rajdeep Sardesai, a prominent representative of India Today as well as more from the group headed by Purie, reacted to this announcement on Twitter by alleging that the portrait was not that of Netaji, but of actor Prosenjit Chatterjee.

“The regrettable part is that senior journalists of your Group did not bother to check the facts. Before making a serious claim like this, they should have checked with any member of Netaji’s family ( for example, Mr C.K.Bose, who clarified on Twitter that the portrait was indeed of the great leader himself), or with the actor himself( who too put the record straight) as well as with the Rashtrapati Bhawan itself. They did not do any of the basic fact checks and joined the ranks with those who were throwing wild accusations for political gains. In gleefully ridiculing the high Constitutional office, they not only discredited their professional ethics but also cast a shadow on the office of the President of India. You will agree that such impossible and juvenile behaviour compromises the dignity of the Rashtrapati Bhawan”, writes Singh in his letter to Aroon Purie.

Purie has served show cause to Sardesai and placed him off the air from India Today TV.