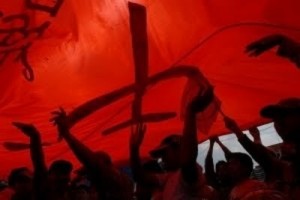 Shubhraja Singh had to be in Patna today to attend office.To do so she had booked the ticket in the Ranchi-Patna Express train with schedule departure Ranchi station on Sunday evening.Though the train departed and reached Patna this morning,she remained stuck in Ranchi and missed the office in Bihar’s capital.

She is no starnge case.Like her were scores of passengers with valid tickets failed to board the train.Reason?

The supporters of the CPI(ML),a left wing party with one MLA in 81 member Jharkhand Assembly,who had come from Bihar to attend the party’s meeting in Jharkhand’s capital,had to return home.Many of them did not have any ticket.

And as such,they reached the station and captured the reserved seats in the train depriving the bonafide passengers and compelling them not to get into the train.After the train left,these passengers held dharna at the Ranchi station.

The dharna was led by Shubhraja.Soon, the railway authorities held parleys with them and returned the fare to them.But not all passengers were satisfied.

Sunita Kumari despatched a letter to the Election Commission of India,authority responsible for the registration of political parties including CPI(ML).”This party promises to serve the poorest of the poor and bring about revolution in our country.But its supporters and leaders captured the train creating untold miseries to hundreds of passengers”,states Kumari’s letter.

When contacted for his reaction,CPI(ML)’s Ranchi Town Secretary B.Kewat apologized on behalf of the party.”We never wanted our men to capture the train.In fact,we had told them that if they did not have tickets,they should adjust with those partymen who had reserved tickets.This did not happen.We are sorry for the inconvenience caused to passengers”,said Kewat.