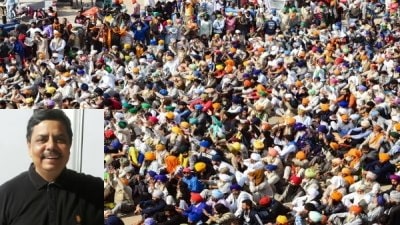 Pradeep  Kumar Sinha, who is a Post- Graduate of the prestigious Jawaharlal Nehru University, New Delhi, has studied the ongoing farmers' agitation.In an interview with Manoj Prasad, Editor, www.jharkhandstatenews.com,he explained that this Kisan Andolan has been a well planned movement against Prime Minister Narendra Modi.

In fact,responding to Manoj Prasad's request,Sinha has authored an article on Kisan Andolan and Hybrid Warfare against Modi.In view of its large size and high quality authentic text,we have divided his article in two parts-1 & 2.The first and second parts will be published world wide in our digital platform on Sunday and Monday.Find time to read it.

Sinha,after superannuating from the corporate world in which he had held senior positions in two of the most leading companies in India,has gone back to his passion of reading and writing.In his latest article,Sinha makes a case for better appreciation of what is called as the Hybrid Warfare.

In fact,Hybrid Warfare  is little understood by many Indians and thereby less appreciated though it poses serious threat to the security and sovereignty of the country.Aware of it,www.jharkhandnews.com Editor Manoj Prasad asked him what is his opinion on the Kisan Andolan.He replied :

"Underneath the main plot of avowedly apolitical Kisan Andolan is the ominously lurking sub-plot of what is called as Hybrid Warfare.It is being waged by Pakistanis and Khalistanis individually and collusively."

More, Sinha added:"Hybrid warfare is substantially based on the philosophy of the Chinese military strategist Sun Tzu.It is enunciated in his book The Art Of War."Sinha quoted Tzu writing in the same book stating,"The supreme art of war is to subdue the enemy without fighting.'

"The famous "A thousand cut"came as a war- cry (should we say a Hybrid War Cry? ) by Pakistan to incrementally wilt India down internally through sustained terrorism and other forms of hybrid warfare.Post-Uri and Balakot Air- strike,Pakistan has realised that under present political dispensation at the Centre, there will be what we may coin as "A Gush For A Cut" .Needless to add, in case of a 'gush' one bleeds more profusely!Still it is looking for opportunities to foment trouble in India.

Thus, FDI(Foreign Destructive Ideology) as acronymed by PM Modi is a wake-up call for the country to comprehend and counter Hybrid Warfare being waged through a variety of means including ideology against it ! "