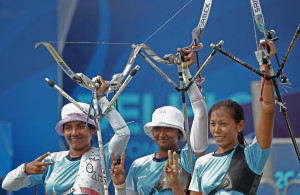 Bombayla Devi of Railway Sports Promotion Board (RSPB), who participated in the 2008 Beijing Olympics in the women’s individual as well as team events,defeated the world’s top ranked Deepika Kumari in the National Ranking Archery Tournament (NRAT) at JRD Tata Sports Complex on Sunday.