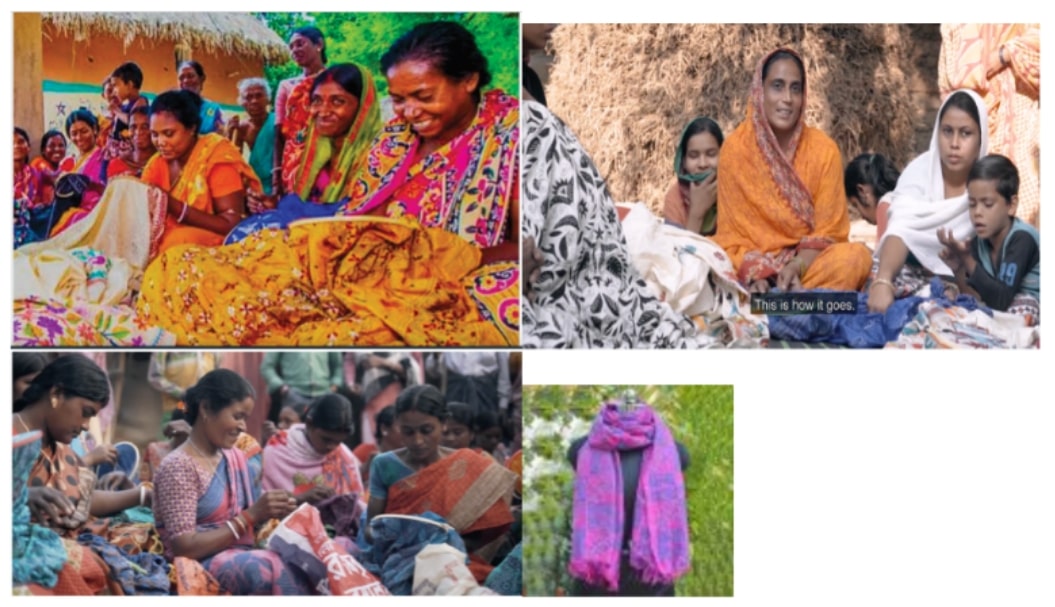 Tribal art and crafts, especially made by women artisans, came into focus when the Prime Minister and some of the Union Ministers purchased some unique handcrafted items on the occasion of International Women’s Day.

One such art tradition that came into spotlight is the Kantha work of Bengal. Smriti Irani bought a bright, and beautiful Kantha cotton/ silk saree, handcrafted by the master craftswomen of West Bengal.

In a fast changing world, where modernity, technology and development have taken root and primitive indigenous ways of living are but a thing of the past, found in text books, India is still home to a large number of tribes, with more than 200 tribal communities spread across. Constituting over 8% of our total population, these tribes have retained their natural ways of life.

Tribal artisans, set in their lives, are still trying to preserve the arts and crafts and traditions of their communities.

One such craft tradition is the Kantha embroidery tradition evolved from the Santhal tribes of Eastern India, namely Bengal.

Kantha embroidery is a form of running stitch embroidery, perhaps one of the oldest forms existing in the country. Women have been preserving this timeless craft tradition which is patchwork with bright coloured threads. Sustainable and eco-friendly, it involves turning any used fabric into bright, attractive art work with delicate, attractive patterns.

The Nakshi Kantha, unique to areas of West Bengal and Bangladesh, which has gained much popularity involves elaborate patterns. Nakshi comes from the Bengali word, naksha, which refers to artistic patterns.

As most tribal art and craft forms, Kantha too reflects a close relationship with nature as its motifs their inspiration from the flora & fauna of the region. Birds, animals, flowers, such as lotuses, fish, leaves and numerous scenes from life in rural tribal Bengal. Once the sole preserve of tribal and rural women, who made this this unique art form has seen a revival in the 20th century, mainly due to the efforts of the daughter-in-law of Gurudev Rabindranath Tagore.

While Kantha is now well-known and produced commercially, it still is practised by tribal women artisans for earning their livelihoods. While the commercial demand is high, these artisans, like most in the handicraft sector suffer from exploitation and lack of opportunities for commerce.

As the nodal agency working towards the empowerment of tribals across the country TRIFED has been procuring and marketing these art and craft through its Tribes India network of outlets. Playing the role of a connector which provides a platform and access to larger markets, TRIFED has an exclusive marketplace for tribal producers – forest dwellers and artisans, to facilitate the purchase of MFPs, handicrafts and handlooms online. The Tribes India platform (tribesindia.com) offers the best of tribal handicrafts and natural organic products and brings them directly to your doorsteps!

TRIFED also has empanelled several artisans and societies working with tribal artisans. One such empaneled supplier is the Burdwan Jute based Garment Co-op Industrial Ltd, Santhal, West Bengal, a society which was created to consolidate Kantha embroidery work done in the villages of Burdwan.