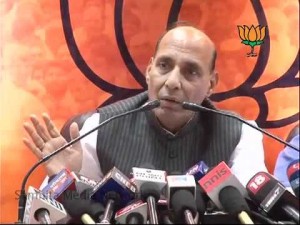 Though it has not clarified its stand on these JD(U) leaders backing Lal Krishna Advani as the BJP’s Prime Ministerial candidate,BJP’s spokesperson Nirmala Sitaraman has said that all accusations made by the JD(U) leaders including Nitish Kumar against Modi,who is its popular and respected leader,were baseless.

She says that her party expects from its allies to lay focus on defeating the corrupt UPA II government.It will be in it is own interest,if the NDA works to formulate strategy to oust the UPS II government,says the BJP skpesperson making it abundantly clear that it was in no mood to sideline Modi for Nitish Kumar.

The party has summoned its Bihar state unit’s core group leaders.They are likely to meet the BJP president Raj Nath Singh in New Delhi on April 23.Said a senior BJP leader:”The prime aim behind calling the meeting of Bihar leaders was to gauge their perceptions on Modi-Advani-Nitish led JD(U) issue.”

In any case,the BJP has to chose between Modi and Advani.”If Advani is preferred,the BJP-JD(U) ties remain in force or otherwise it is sure to break soon or later”,says an observer.”But since Advani was lagging behind in popularity index to Modi,most BJP workers were not ready to swim and sink with Advaniji.”