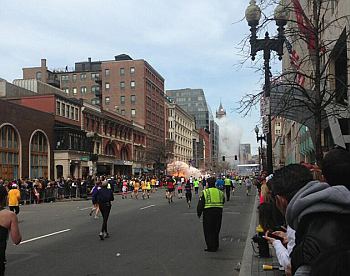 As they were participating in the Boston Marathon,two explosions reportedly went off.

”A 78-year-old just nearing the finish line in the Boston Marathon crumpled to the ground from the force of one of two blasts that killed three people on Monday, according to a video broadcast”,said a CNN report.

“A tremendous explosion went off, the shock waves just hit my whole body,” Bill Iffrig told CNN. “My legs started jittering around (but) I didn’t feel any severe pains.” Just as quickly as he was felled, however, a race official came and “helped me get over the finish line so I could finish the race.”

Reports said more than 100 people were injured near the finish line of the celebrated Boston Marathon while the race was still in progress. “A surgeon at Massachusetts General Hospital confirmed that at that hospital alone, there had been several amputations of limbs”,said NBC news.

Though the identity of the culprits were not clear yet,the marathon was organized by the Boston Athletic Association.”The runners who were diverted were gathered at the Boston Commons, a central park area”,said the Association adding :“Today is a sad day for the City of Boston, for the running community, and for all those who were here to enjoy the 117th running of the Boston Marathon.”