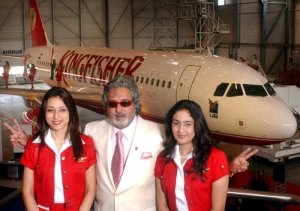 The man behind the debt ridden and grounded Kingfisher Airlines — Vijay Mallya –is exploring ways to see it fly again,it is learnt.

Reports say Mallya was trying to fetch Rs.800 crore from a foreign entity to make Kigfisher operational evenas his talks with British liquor maker Diageo Plc were still on.

“Mallya, who is also the promoter of United Spirits Ltd (USL), had signed a deal with Diageo to sell his controlling stake in the company. Diageo would also pick up another 26 per cent through mandatory open offer”,said a report in India Today.

“Kingfisher management sources claimed to have got a nod from the Director General of Civil Aviation (DGCA) to go ahead with its pilot training programme ahead of the airline’s re-launch.

Kingfisher’s flying licence was suspended by the DGCA in October 2012 and it later lapsed in December after the airline was grounded following a strike by its employees, including pilots, over non-payment of dues”,added the same report.

Notably,Kingfisher has been in a huge debt of more than Rs13,582 crore.