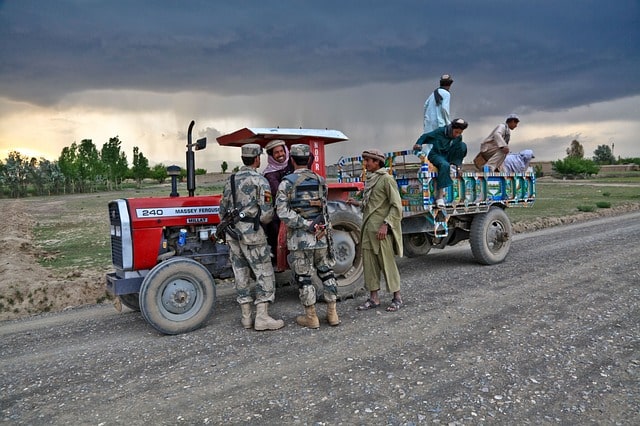 Taliban’s initial euphoria of all-around victory in Afghanistan is now turning into a nightmare. A stark reality of a stalemate awaits it , because capture of Kabul & Kandahar, power Centres of Afghanistan, seem beyond its capabilities. It’s claim of controlling 85% Afghanistan turned to be a phoney statement, propped up by Pakistan media . Ground reports indicate that it does not control more than 45-50%of desolate land with not more than 25-30 % rural population .

It is now obvious that physical withdrawal of US Troops was a part of changed strategy. USA has repositioned itself to cut diamond with diamond —— in other words, defeat Afghan (Taliban) with Afghan forces . In this context , the statement made by US President Joe Biden , a few days back . He had stated that threatening of Kabul was INEVITABLE by Taliban . In simple terms, it meant that US would respond with air support and other means if Kabul was threatened . This was assurance to Ashraf Ghani , president of Afghanistan, and also a muted warning to Taliban not to attempt it .

Taliban is now coming to terms with ground reality of its capabilities. The true reality of US Troops withdrawal, being hailed as “ Victory”, is now dawning upon both Afghan Taliban and its supporter, Pakistan . Victory is no more in sight , while its offensive has been stalled and stalemated .

Afghan troops , trained and equipped by USA far out number the Taliban. The estimated strength of Afghan Government forces is estimated between 3 to 3.5 Lakhs. As against this, Afghan Taliban fighters are allegedly 75000 or so. President Ashraf Ghani claims that Pakistan has sent some 10,000 “Jihadis”, who took part in the attack on Kandahar . Reports of dead bodies and wounded Taliban reaching Pakistan is being discussed in Pakistan media. Taliban now realised that Weapons and equipment being given by Pakistan or some other countries, are no match for superior quality of US weapons with Afghan Government forces .

Taliban understood this when they attacked Kandahar. It thought it was a cake walk . But resistance by the government forces and their weaponry surprised the Taliban. It became manifestly apparent to Taliban that it can not capture cities with these kind of weapons . It does not have air support too, though Pakistan clandestinely tried to support it at Kandahar . Taliban also knows that to rule Afghanistan, it has to control urban areas. The reality of Afghanistan is that 70-75% of its population lives in cities .

Countryside , where Taliban has control barely comprises 25-30% of rural population. It is stated that Kabul itself has a population of 25%. Therefore Taliban is not in a position to capture cities. And unless it does it , dream of victory is far fetched. It is only in Pakistan media’s dreams !

It is in this context, it ought to be understood that Taliban offensive on Kandahar was beaten back by Afghan government forces with heavy casualties to Taliban. Afghan defence Minister had claimed recently that Government forces have recaptured 17 districts, under Taliban control. It has been admitted by Taliban spokesperson, saying that it was a desolate land. Also, the Spin Boldak crossing, opposite Chaman border out post of Pakistan, has been recaptured by the Govt forces .

Reverses suffered by Taliban has now mollified Taliban leadership . It has therefore been making reconciliatory statements. It has diluted its stance on talks with Ashraf Ghani Government. It’s precondition of releasing about 7000 Taliban fighters in Afghanistan jails, no more exists .

It had agreed to meet Government negotiators, Hamid Karzai and Abdulla Abdulla, at Doha in Qatar. A “power - sharing“ formula with the elected government of Ashraf Ghani is emerging as the possible winner .

Taliban has no other choice but to fall in line. This becomes clear from its recent statements . It no more treats Pakistan as a god father , which it did in 1995-2001. When, recently, a Pakistani journalist asked Afghan Taliban spokesperson, on its views on TTP ( Tehrik- E- Taliban of Pakistan), a clear cut response came “ It is a Pakistan Problem and does not concern Afghanistan”. The spokes person did not clarify whether it supports TTP or not .

It may be noted also that Afghan Taliban has strongly condemned recent abduction of the daughter of Afghanistan’s ambassador to Pakistan . Therefore, there goes Pakistan’s dream project of “ Strategic Depth” in Afghanistan. It is learnt that in a recent briefing of Pakistan’s National Assembly , General Bajwa , Chief of Pakistan Army , had warned that TTP was hand in glove with Afghan Taliban . This has serious repercussion for Pakistan .

May be one faction of Afghan Taliban might support Pakistan military but there are no ominous signs of it . But fencing of Durand Line would lead to tension with Afghan Taliban because fencing would curtail free movement of Pakhtoons across the Durand Line . Pakistan would now taste the product of its own creation .

Afghan Taliban has now understood the ground realities . Present leadership is markedly different from its predecessors who existed 25 years back . Though ideology of Islamic rule has not changed but it knows that it can not attain an all out victory . Even if it does gain some success with a lot of bloodshed, it can not rule Afghanistan without the help of outside world for reconstruction and wealth creation .

It has to mend fences with regional powers like China and India . Recent overtures are noteworthy. It has assured India of non - interference in Kashmir and mitigated Chinese fears on Taliban interference in Xinjiang. In fact, it seeks India to continue with its development programme without siding with opposing forces. It is looking towards China for massive investment.

All said and done, Afghan Taliban, for the time being, is getting into a reconciliatory mood . A thought may be gaining ground that change in political profile of Afghanistan can be better done from being
inside the government than unwanted bloodshed . However short lived this arrangement might be but prospects of “Power - Sharing arrangements” between the two belligerents in Afghanistan can not be ruled out .

Those who think that US troops Withdrawal was US defeat, they were wide off the mark. By repositioning itself USA is turning 20 years of stalemate into victory . New strategy of USA is to knock out the opponent from Outside the ring. It is going to be “ No Vietnam” type of disgrace. It is terminal correction of its strategy.

How does Pakistan position itself is no rocket science to know if likes of Imran Khan , Shah Mohammed Qureshi and Sheikh Rasheed continue to rule Pakistan . Emerging situation would not only upset Pakistan but many Afghanistan watchers and analysts, who had given victory on a platter to Taliban . Pakistani analysts and thinkers must remember, while Afghanistan had been a grave yard of foreign empires , there is also a corollary to this : It was never an appendage to any power. Would Pakistan keep this in mind ?