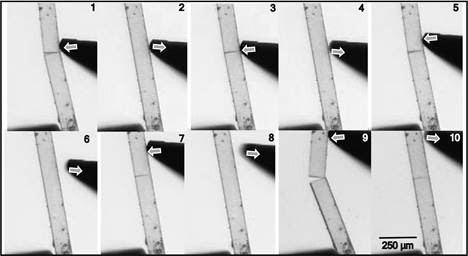 New materials may soon make it possible for damaged electronic components, such as in space crafts, to mend themselves. The materials recently developed by scientists can repair their own mechanical damages with the electrical charges generated by the mechanical impact on them.

Devices that we use daily often break down due to mechanical damage, forcing us either to repair or replace them. This decreases the life of the equipment and increases maintenance costs. In many cases, like in space crafts, human intervention for restoration is not possible.

Keeping such necessities in mind, researchers from the Indian Institute of Science Education and Research (IISER) Kolkata, teaming up with IIT Kharagpur, have developed piezoelectric molecular crystals that repair themselves from mechanical damages without the need for any external intervention. Piezoelectric crystals are a class of materials that generate electricity when it undergoes a mechanical impact.

In these molecular solids, due to the unique property of generating electrical charges on mechanical impact, the broken pieces acquire electrical charges at the crack junction, leading to attraction by damaged parts and precise autonomous repair. This research supported by the Department of Science and Technology, GoI via Swarnajayanti Fellowship to CM Reddy and Science and Engineering Research Board (SERB) research grants has been published in the journal ‘Science’ recently.

This methodology was initially developed by the IISER Kolkata team led by Prof. C Malla Reddy, a recipient of Swarnajayanti fellowship (2015) given by the Department of Science & Technology, GoI. Prof. Nirmalya Ghosh of IISER Kolkata, a laureate of the Society of Photo-Optical Instrumentation Engineers(SPIE) G.G. Stokes Award in Optical polarization 2021, used a custom-designed state-of-the-art polarization microscopic system to probe and quantify the perfection of the piezoelectric organic crystals. These materials with perfect internal arrangement of molecules or ions are called ‘crystals’, which are abundant in nature.

The IIT Kharagpur’s team, Prof. Bhanu Bhusan Khatua and Dr. Sumanta Karan studied the performance of the new materials for fabricating mechanical energy harvesting devices. The material may find application in high-end micro-chips, high precision mechanical sensors, actuators, micro-robotics, and so on. Further research into such materials may eventually lead to the development of smart gadgets that self-repair cracks or scratches.