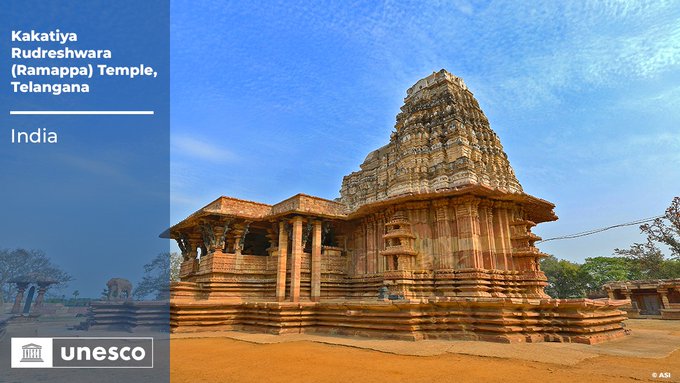 In yet another landmark achievement, India’s nomination of Rudreswara Temple, (also known as the Ramappa Temple) at Palampet, Mulugu district, near Warangal in the state of Telangana has been inscribed on UNESCO's World Heritage list.

The decision was taken at the 44th session of the World Heritage Committee of UNESCO today. Ramappa temple, a 13th century engineering marvel named after its architect, Ramappa, was proposed by the government as its only nomination for the UNESCO World Heritage site tag for the year 2019.

The Prime Minister, Shri Narendra Modi has expressed happiness on UNESCO declaring KakatiyaRamappa Temple a World Heritage site. He also urged the people to visit this majestic Temple complex and get a first-hand experience of it’s grandness.

Reacting to a tweet by UNESCO, the Prime Minister said;

"Excellent! Congratulations to everyone, especially the people of Telangana.

The iconic Ramappa Temple showcases the outstanding craftsmanship of the great Kakatiya dynasty. I would urge you all to visit this majestic Temple complex and get a first-hand experience of it’s grandness."

The Union Minister of Culture, Tourism and Development of North Eastern Region (DoNER) Sri G Kishan Reddy thanked Prime Minister Narendra Modi for his guidance and support as the United Nations Educational, Scientific and Cultural Organization (UNESCO) conferred the World Heritage inscription to Rudreswara Temple, (also known as the Ramappa Temple) at Palampet, Mulugu district, near Warangal in the state of Telangana.