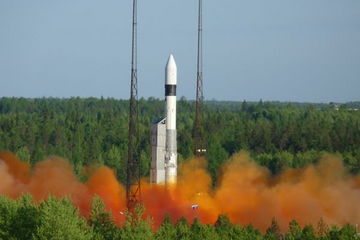 Laika was sent to the space because scientists believed humans would be unable to survive the launch or the conditions of outer space.So perhaps engineers viewed flights by animals as a necessary precursor to human missions.Laika had died soon after the launch.

With an identical aim,the Russia launched today a satellite carrying 100 odd living creatures including snails,lizards,mice,plants,seeds and loads of bactaria,according to reports..

“The Soyuz-2.1A rocket-carrier, carrying the Bion-M vehicle, was launched at 2 p.m. Moscow time (1000 GMT) from the Baikonur space centre in Kazakhstan”, Xinhua reported.

“The rocket also placed six small communication satellites made in Germany, the US, and South Korea on a near-earth orbit at an average altitude of 575 km”,said India Today story based on Xinhua story.

It said quoting space agency Roscosmos that “6,300-kg Bion-M vehicle will return to Earth May 18 after over 70 experiments”

This is the first space flight of small animals and plants after a six-year break.