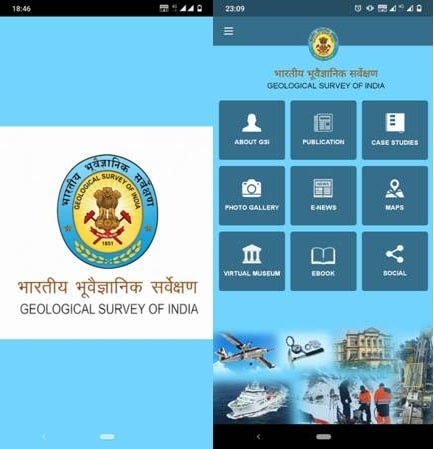 Geological Survey of India, the 170-year old premier Geological Institution under the Ministry of Mines has decided to make itself accessible to the masses and make its presence felt digitally by launching the GSI Mobile App (Beta Version) in the year 2020 and upgrading it periodically.

Through the App , people will become more enlightened about various facets of  GSI activities .It  is also in line with the Digital India campaign initiated by the Central Government .

The App is available for Android platform as of now and can be downloaded from Google Play Store. Since its launch on August 27, 2020 the App has been downloaded by thousands of people across the country and also received 4.5 stars in reviews and a rating of  3+ in Google Play Store.

The App is divided into various sections where it talks about the legacy of GSI, the in-house publications of the organisation, various case studies on different missions of GSI, the picture gallery etc. E-news division updates masses about the latest news as far as the organization is concerned in terms of work and the career opportunities as well as the training facilities that are available with GSI.

It also deals with various maps, videos and downloads of GSI work. The e-book section would give the masses an idea of the exploration works done by GSI. It connects the YouTube, Facebook and Twitter pages of GSI from the app as well. This App will be further upgraded for higher versions of Android OS and for iOS compatible mobiles (i-Phones) and many more features will be added in the near future.

Besides bringing the activities  and achievements of GSI to the general public, the purpose of such an App is  to draw the attention of the  student community towards the subject of Geology and its importance in nation building. GSI requests the users and common people to come up with suggestions as to what more they would like to know about GSI.  Such suggestions can be send  topro@gsi.gov.in/ prmcell@gsi.gov.in .

The Geological Survey of India (GSI ) was set up in 1851 primarily to find coal deposits for the Railways. Over the years, GSI has not only grown into a repository of geo-science information required in various fields in the country but has also attained the status of a geo-scientific organisation of international repute.

GSI’s chief role includes providing objective, impartial and up-to-date geological expertise and geoscientific information of all kinds, with a focus on policy making decisions, commercial and socio-economic needs. GSI also emphasises on systematic documentation of all geological processes derived out of surface and subsurface of India and its offshore areas. The organisation does so by using the latest and most cost-effective techniques and methodologies, including geophysical and geochemical and geological surveys.

GSI’s core competence in survey and mapping is continuously enhanced through accretion, management, co-ordination and utilization of spatial databases (including those acquired through remote sensing). It functions as a ‘Repository’ or ‘clearing house’ for the purpose and uses latest computer-based technologies for dissemination of geoscientific information and spatial data, through cooperation and collaboration with other stakeholders in the Geo-informatics sector.

GSI, headquartered in Kolkata, has six regional offices located in Lucknow, Jaipur, Nagpur, Hyderabad, Shillong and Kolkata and state unit offices in almost all states of the country. Currently, GSI is an attached office to the Ministry of Mines.