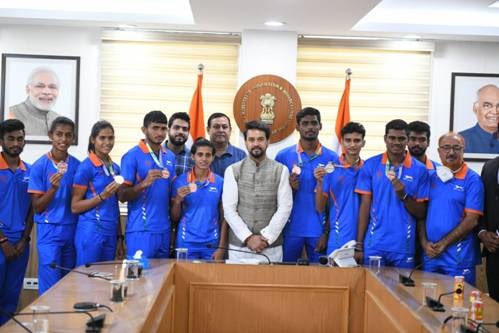 In his interaction with these athletes, the Sports Minister Shri Anurag Singh Thakur congratulated the medal winners.He said that India’s under 20 Athletics Champions have made the country proud. “It is a big moment for us to cherish”, the Minister said. Shri Anurag Thakur expressed confidence that the young athletes will excel in the future international competitions like Asian Games, Commonwealth Games & Olympic Games. "We see a hope in you", the Minister said.

Mr. Amit Khatri won Silver in 10000m Race Walk.Amit Khatri bravely overcame breathing difficulties to claim a silver medal in the men’s 10000m Race Walk in the World Athletics U20 Championships. Amit Khatri, who kept pace in the leading group much of the time and took the lead at the 9000m mark, clocked 42:17.94 to finish behind Kenya’s HeristoneWanyoni (41:10.84). His frequent visits to the refreshment table to get water – especially the last one with just a lap and a half to go for the finish – could have led him to covering more distance and missing gold.

Ms. Shaili Singh won Silver in Long Jump.Shaili Singh recorded her personal best of 6.59m in the final of the women's long jump en route to her silver medal. National U20 record holder Shaili Singh was one of three women Long Jumper who secured automatic qualification, set at 6.35m, for the final when she leapt 6.40m on her third attempt. 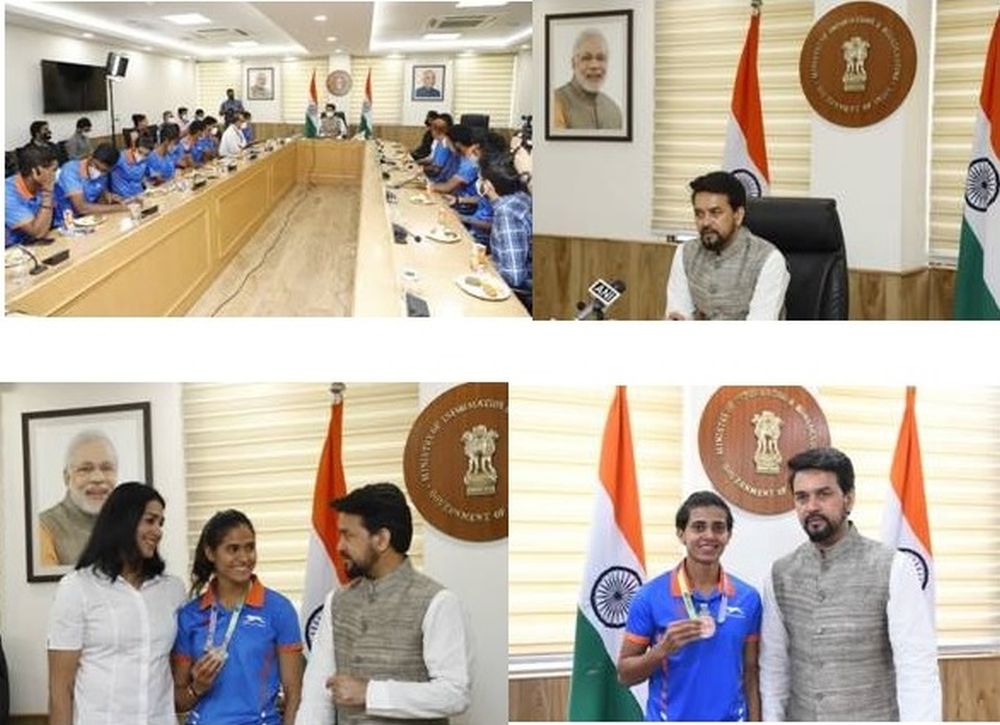 Mr. Barath Sridhar, Ms. Priya Mohan, Ms. Summy, Mr. Kapil, Mr. Abdul Razak won Bronze in Mixed 4x400m Relays. The Indian 4x400m mixed relay team claimed the bronze medal on the opening day of World Athletics U20 Championships in Nairobi. Barath Sridhar, Priya Mohan, Summy and Kapil clocked 3:20.60 behind Nigeria (3:19.70) and Poland (3:19.80) to post a creditable time and gave a glimpse of the depth of India’s talent in the quarter mile event.At the 2018 edition of the U20 World Championships in Nairobi, Hima Das had won a gold medal in the women's 400m.

The Indian quartet – with Abdul Razak Rasheed running the lead leg – had clocked 3:23.36 in the heats in the morning. Priya and Summy ran their women’s 400m heats not long after that. They recovered well to ensure that the efforts of Barath and Kapil, who ran a blistering anchor leg in 46.42 seconds, did not go in vain.

Barath, the Federation Cup Junior Championships winner, was credited with a time of 47.12 for the lead-off leg and handed over the baton to Priya in the second place behind South Africa. Priya dug deep in her reserves and, with a time of 52.77, was the third best among those who ran the second leg. Summy’s kept India in the medal hunt and she ran a good leg in 54.29.

Kapil strove hard on the anchor leg but despite being the fastest of the runners in the final was unable to close the gap with Poland and Nigeria. He was credited with having run his lap in 46.42 seconds, inspired by the efforts of his three team-mates.