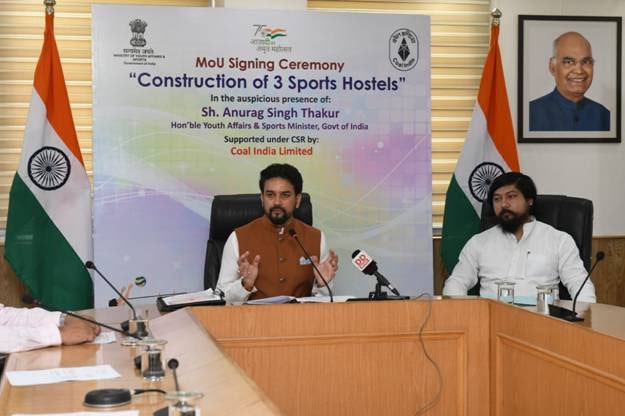 National Sports Development Fund (NSDF) of Department of Sports, M/o YAS signed MoU with Coal India Limited in the presence of Union Minister for Youth Affairs & Sports Shri Anurag Singh Thakur on Tuesday in New Delhi for contribution of Rs 75 cr by CIL towards NSDF as part of CSR.

The Minister of State for YAS Shri NisithPramanik, Secretary of Department of Sports Shri Ravi Mittal and officers of Coal India Lmt. also graced the event.

During his address, Shri Anurag Thakur said that the valuable contribution by Coal India to NSDF has come at an appropriate time in the backdrop of unprecedented performance by our sportspersons at the recent Olympics and Paralympics.

He congratulated the Indian athletes for their best ever performance at the Paralympics and by winning 19 medals at the Tokyo Paralympic Games. Appreciating the initiative of Coal India, the Minister added that with this a part of the funds generated from mining of coal will go to chisel our sportspersons into ‘diamonds’ that deliver a podium finish.

Giving more details, Sh. Anurag Thakur said that the fund is used to promote sports in general and specific sports disciplines for achieving excellence at the national and international level. The Fund is also judiciously applied for modernization and development of infrastructure. In the previous years, a number of PSUs have generously contributed to NSDF.

“The sports academies under SAI and LNIPE needed more hostels for the benefit of athletes. Coal India Ltd's endeavor to contribute substantial funds of Rs.75 crore towards construction of three hostels for sports athletes will bring ease of training and enhanced facilities.”, Shri Thakur added.

Shri Thakur further said that the signing of MOU for construction of three hostels at SAI academies at Bangalore, Bhopal and LNIPE Gwalior will strengthen the bond between the Department of Sports / NSDF and Coal India Ltd. The Minister proposed that Sports Authority of India and Coal India Limited should jointly set up a Sports Academy for furthering the cause of sporting culture in the country.

Shri Thakur appealed to all PSUs, corporates and individuals to come forward and contribute generously to the NSDF as part of their corporate social responsibility and become stakeholders in India's journey to becoming a sporting powerhouse.

During his address, Shri Nisith Pramanik said that Coal India Ltd has always supported the culture of competitive sports in India. Shri Pramanik assured that the funds provided by CIL will be used judiciously and the project will be completed in a time bound manner.

Secretary, Sports Shri Ravi Mittal said that with the construction of hostels in these three academies, it will be possible to hold national coaching camps at these three locations. He urged Coal India to continue their valuable support to NSDF in the future also.

Secretary Coal, Sh Anil Jain said that it's a matter of pride for Coal India to contribute to sports development in the country. While it is their duty to support the talented sportspersons, it also contributes to the brand image of Coal India, he said.

Contribution to NSDF has mainly come from PSUs and PSBs. As of 31.03.2021, total CSR contributions received are Rs. 170 crore and Government of India, Ministry of Youth Affairs & Sports has made contribution of Rs. 164 crore its matching share.

From this fund, the Ministry has given assistance to organizations for infrastructure and setting up of academies, Assistance to sportspersons for their customized training and to Sports Authority of India (SAI) for athletes covered in Target Olympic Podium Scheme (TOPS).