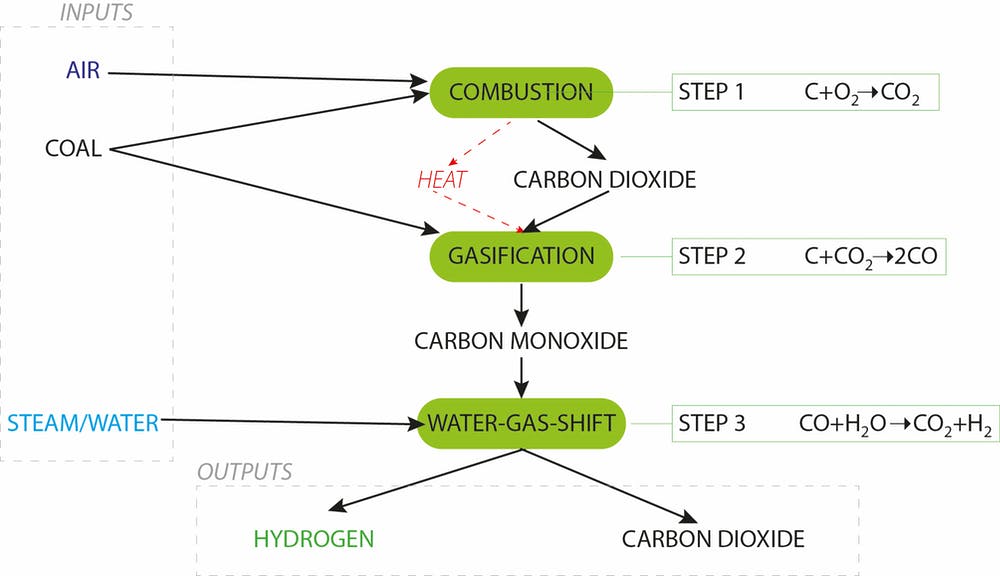 In case of renewable energy (Green Hydrogen) surplus solar power is used to electrolyze water into hydrogen and oxygen. The global emphasis is on substituting liquid fuels with hydrogen (as fuel in vehicles), storage of surplus renewable power as hydrogen (as power cannot be stored at a cost effective price), and cutting down emission.

Coal is one of the important sources of hydrogen making (Brown Hydrogen).

However, Coal has not been encouraged elsewhere because of the fear that while extracting hydrogen via coal (from the moisture embedded in coal) there may be carbon emission. Almost 100% of Hydrogen produced in India is through Natural Gas.

Production of hydrogen from coal will have challenges in terms of high emissions and CCUS will play an important role. However, when the carbon monoxide and carbon dioxide formed during coal to hydrogen process are trapped and stored in an environmentally sustainable manner (CCS and CCUS), then, Indian coal reserves could become a great source of hydrogen.

In steel making, lots of work has been done on production of steel by use of Hydrogen. However, iron reduction through hydrogen is an endothermic reaction and will require lot of heat. This heat can be generated in DRI plants due to presence of CO in syn Gas being produced from coal gasification process.

In light of the above, Ministry of Coal has constituted 2 Committees today, one to oversee the program and another of experts to give guidance to the Ministry. This is aimed for contributing to PM&#39;s agenda of a hydrogen-based economy in a clean manner.

The broad terms of reference of Task Force are as under:

1. Identification of role to be played by each stakeholder Ministry.

3. Monitoring of activities towards achieving coal based Hydrogen production

4. Setting up sub committees to achieve the objective.

5. To coordinate with Coal Gasification Mission and NITI Aayog.

The broad terms of reference of Expert Committee is as follows:

1. Identifying experts in India and co-opting as members

2. Desk based review of progress in hydrogen technology and also review

4. Prepare a road map for coal based Hydrogen production and usage including

5. Identifying activities for implementation of coal based hydrogen production

6. Assisting Task force in implementation of Coal based Hydrogen production

The expert committee is expected to submit the report in three months.