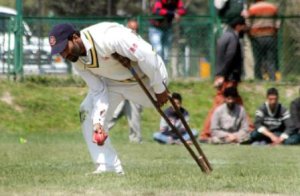 Israel is bereft of his right hand.Gobardhan Rajak walks with a stick as he does not have a leg.For these physically challenged people,Twenty-20 cricket match is of no meaning.Right?

Among the four teams that participated in the tournament,Dhanbad and Gomoh played the final with former defeating the latter which bagged the runners up position.

The tournament was organized by Paropkar Param Punya Samiti.”In view of the enthusiasm and joy that writ large on the physically challenged people who participated in the tournament,we have decided to organize it at the state level from next year”,says Samiti’s Secretary Prem Paswan.

Responding to the Samiti’s call to physically challenged to participate in the tournament,eight teams had sent applications.Four teams however failed to turn up.