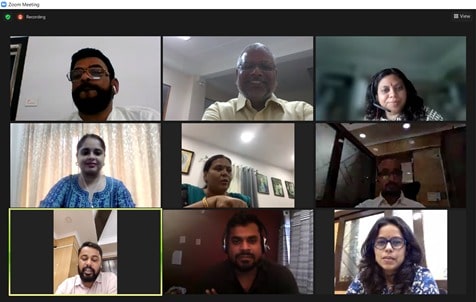 Trafficking of poor women and girls who were sociologically described as Second Sex has been an old menace across the globe.

Today,UNICEF Jharkhand in collaboration with Policy Development Advisory Group (PDAG), organized a virtual roundtable on prevention of trafficking of girls and women in the state.

JobaMajhi, Minister of Social Welfare, Women and Child Development, Jharkhand addressed the session as Chief Guest. MLAs, such as Deepika Singh, Baidyanath Ram, Sukhram Oraon & Deepak Birua also took part in the webinar and shared their views and concern on this issue.

Sharing her views on human trafficking, Ms Deepika Singh, MLA, Mahgama, said, “We need accurate data on human trafficking in the state. There is a need to create awareness at the community and Panchayat level on this issue so that the general public who often become victims of human traffic are more aware.

The village level child protection units should be strengthened, so that children can be monitored and their well-being ensured. Prosecution of culprits is also important to send out a strong message in the society. We all need to come together to stop this inhuman practice that still continues in our society.”

Baidyanath Ram, MLA from Latehar also shared his opinion and said, “We all need to break the silence against trafficking of children, women and girls in the state. Especially, victims and their family should raise their voice, so that the guilty can be punished. We need to ensure registration of labourers and workers, so that they can be tracked if they go out of the state. Shelter homes should be established in every district of the state to ensure safety, security and wellbeing of children.”

Presenting the real picture of human trafficking and its impact on girls and women in the state, Mr Prasanta Dash, ChiefField Office UNICEF Jharkhand said, “Children, women, migrants, refugees and internally displaced persons, are particularly vulnerable to human trafficking. Human trafficking is also an issue of economic and social development.

However, this organised crime is not simply the symptom of a fragile or poor region, it occurs in every region; irrespective of the size of the GDP. In Jharkhand cases of trafficking of girls are reported and some are rescued as well. But we need to find ways to prevent it from happening. Increase awareness, availability and continuity of education and skill development programs for adolescent girls and boys will also help prevent trafficking. The registration of migrant workers must be ensured at panchayat level.”

Introducing the session, Ms Astha Alang, Communication, Advocacy & Partnership Officer, UNICEF Jharkhand, said, "Human trafficking is a serious crime and a grave violation of human rights. Around the world, out of three, one child is a victim of human trafficking. There are a variety of reasons due to which human trafficking happens for instance prostitution, sexual exploitation, economic situation of the victim and the family and education.”