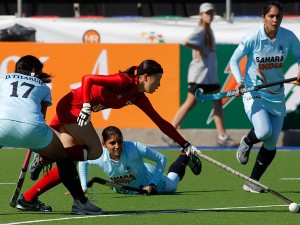 This was Jharkhand’s third consequitive victory in the tournament.Jharkhand player Punam Madhuri Tete topped the score list with two goals followed by Birsi Mundu, Anima Minz and Rajni Soreng scoring a goal each for Jharkhand.

Jypti and Baljeet Kaur scored three goals each as Punjab raced to a 9-0 win against Goa in their opening match of Pool-F. Ruchi Batta and Kuljeet Kaur are the other two goal scorers for Punjab.