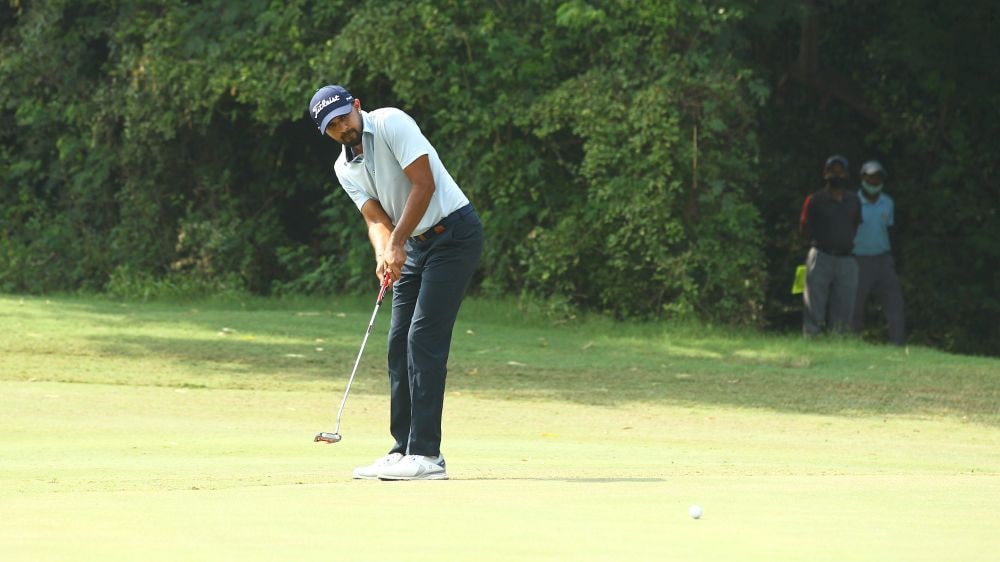 Kolkata’s Viraj Madappa hit day’s best card of six-under 66 to be the joint leader at 12-under 204 along with Bengaluru’s Khalin Joshi who shot a 69 in round three of the Rs. 70 lakh TATA Steel PGTI MP Cup  at Delhi Golf Club (DGC)  here on  Thursday

The 23-year-old Madappa’s (71-67-66) late charge saw him make five birdies on the last six holes. As a result, Viraj jumped five spots from his overnight tied sixth. Joshi (69-66-69), on the other hand, bogeyed the last hole that saw him drop from his overnight sole lead into the joint lead.

Delhi’s Rashid Khan and Sri Lankan N Thangaraja were tied for fifth at eight-under 208. Chandigarh’s Yuvraj Sandhu also shot the day’s best score of 66 to be placed tied ninth at six-under 210. Shiv Kapur (70) was a further shot behind in tied 12th position.

SSP Chawrasia and PGTI Order of Merit leader Karandeep Kochhar of Chandigarh were both in tied 32nd place at two-over 218.

Arvind Khanna of the Delhi Golf Club, the only amateur to make the cut, was placed 53rd at 10-over 226.

Viraj Madappa, currently ninth on the PGTI Order of Merit and fresh from two top-10s in the last three PGTI events, made two birdies and a bogey on the front-nine to be one-under at the turn. Viraj, a winner on the Asian Tour in 2018, then had a birdie-blitz from the 13th onward as he picked up five strokes.

The tall and well-built Madappa sank long birdie putts on the 13th, 15th, and 16th including a 30-footer on the 15th. Viraj missed out eagle opportunities from within 12 feet on the 14th and 18th where he picked up birdies. Had his putt not lipped out on the 17th, Madappa would’ve had birdies on the last six holes.

Viraj said, “I've been playing really well and giving myself a lot of chances but I haven't been really optimizing everything. I've been hitting the ball really close, so that helps at a golf course like this where you need to put the ball in the fairway and the right spots on the green. I need to hole a few more putts though but I'm not complaining because the game’s looking really good.

“I think I just built on what I did yesterday, kept hitting it close and I was really patient throughout. The last few events I've been up on the leaderboard but I just haven't been able to build solid four rounds over a tournament. I’ve put in three solid rounds so far this week and am now just hoping for a good one tomorrow.

“I have won an amateur event over here so I do fancy playing at the DGC.”

The 29-year-old Khalin Joshi (69-66-69), the overnight leader by two shots, was four-under for the day through 10 holes after making five birdies and a bogey. Khalin, however, lost momentum with two bogeys and a lone birdie on the last seven holes. He bogeyed the closing 18th where he found the bushes.

“I played a good round but was disappointed with the finish. I hope to come back with a relaxed frame of mind in the final round,” said Joshi.

Angad Cheema, in good form since his top-5 finish at the previous PGTI event in Srinagar, continued to impress closing the day in third place.

Like Angad, Kartik Sharma too had an error-free round that placed him fourth. Kartik leads the PGTI’s Emerging Player of the Year race with the highest earnings among the rookies in the season so far. His earnings stand at Rs. 7,28,600.