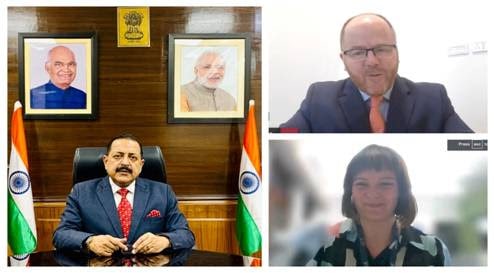 The Indian Minister informed his British counterpart that under the leadership of Prime Minister Narendra Modi, the UK has emerged as India’s second largest international research and innovation partner. The India-UK Science & Technology (S&T) collaboration has been growing at a rapid pace and the joint research programme has gone from an almost zero base to close to £300-400 million now, he said.

Calling for greater India-UK collaboration in clean and green energy areas, the Minister said, four technology value chains contribute about half of the cumulative CO2 savings: technologies to widely electrify end-use sectors (such as advanced batteries); carbon capture, utilisation and storage (CCUS); hydrogen and hydrogen-related fuels; and bioenergy. He also fagged off areas like affordable biomaterials, health data science, and livestock research, neuroscience wherein officials/scientists from both sides can discuss and explore possibilities of future collaborations.

Dr Jitendra Singh pointed out that the Newton Bhabha MoU provided an opportunity to take India UK S&T cooperation to the next level in various research areas, for example energy security, food and agriculture, water, health, climate change, environmental studies as well as social and cultural changes that are taking place in India. The Minister appreciated the outcome of Newton Bhabha MoU and said he look forward to develop more much bilateral collaborations of mutual benefit with dedicated financial commitments.

Dr Jitendra Singh said that India will join G20 troika in few days from 1st December this year and will hold the G20 presidency from December 1, next year and India plans to convene the G20 leaders' summit in 2023 for the first time. He said, the S20 group (Science track of G-20) has the most important responsibility to engage with all stake holders in the spirit of collective foresight and develop science-based solutions to counter the multitude of challenges faced by the humanity. The Minister said that India supports the “ONE HEALTH” approach and it has proposed “Global Equitability for Health Infrastructure Development” to counter future challenges like current pandemic” as the theme for the next S-20 Summit to be held in India.

Dr Jitendra Singh said that this multidimensional, multi-institutional, multi-agency cooperation covers energy security, food and agriculture, water, climate change, environmental studies as well as social and cultural changes that are taking place in both countries. He recalled that during the last India UK virtual summit held during May 2021, Prime Ministers from both countries emphasized their shared commitment to an enhanced partnership in science, education, research and innovation and look forward to the next ministerial Science and Innovation Council (SIC).

Dr Jitendra Singh informed that the “Science and Innovation Council” (SIC), is apex body to review overall bilateral scientific cooperation (except strategic sector) between two countries and it is held once in two years alternatively in India and the UK. SIC reviews bilateral scientific collaboration, not only of our DST, DBT, MOES, CSIR but also of DAE, ICMR, ICAR, Ministry of Education, ICSSR with counterpart UK agencies. Last SIC meeting was held at New Delhi on 26th July 2018.

India UK S & T partnership covers all aspect of Research and Innovation from discovery to development to translation which is required for our nations to rise to new heights together.

In the recent past, Govt of India has launched several flagship initiatives such National Mission on Interdisciplinary Cyber Physical Systems(ICPS); Quantum Computing and Communication; National Mission on Supercomputing, Deep Ocean Mission, Electric Mobility, Green hydrogen etc. India is also on the way to announce its new policy, which revolves around the core principles of being decentralized, evidence informed, bottom-up, experts-driven, and inclusive.

The present Government has laid emphasis on promoting the value chain of innovation, entrepreneurship and IP generation. The Indian innovation system is more purpose driven rather than process driven with focus on affordability and accessibility.

There is great need to enhance industry-led collaborations or industry participation both at the national as well as international levels to ensure application oriented technologies for solving societal needs and spur innovation.