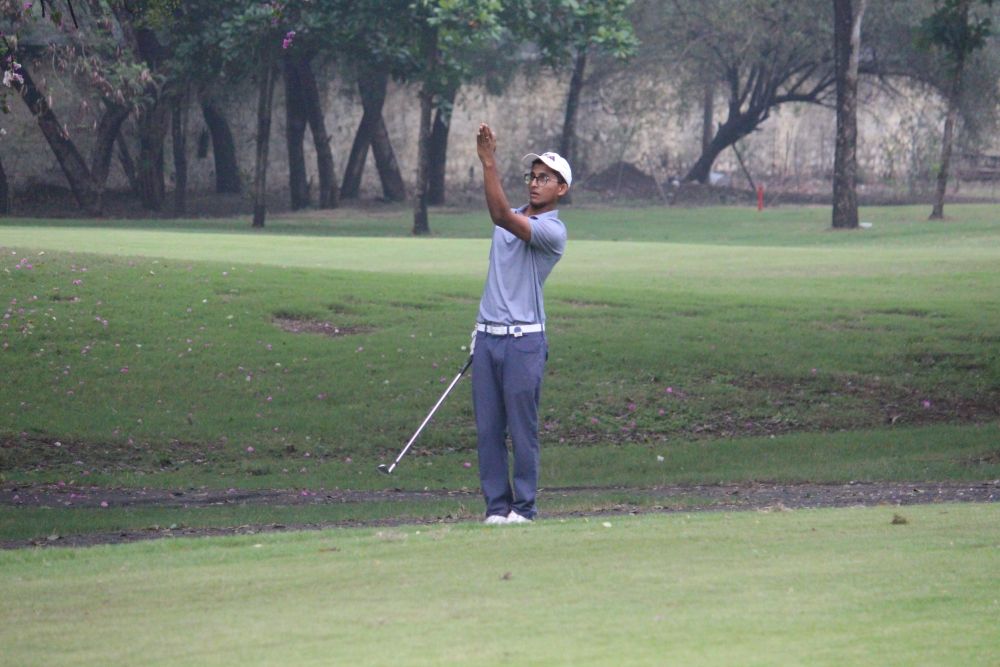 The left-handed Kartik (66-60), lying tied second and three shots off the lead after round one, moved his total to 13-under 126 after making 10 birdies and a bogey during his second round. His  60 is the best round of the tournament so far.

First-round leader Abhijit Singh Chadha (63-65) of Chandigarh continued his impressive show with an error-free four-under 65 to be placed second at a total of 11-under 128 on a day that witnessed overcast conditions but no rain.

There was a fair distance between the top two and the rest as Bengaluru’s Syed Saqib Ahmed (64), Om Prakash Chouhan (65) of Mhow, Bangladesh’s Md Zamal Hossain Mollah (66), and Delhi’s Wasim Khan (67) were clubbed together in tied third place at six-under 133.

Sagar Raghuvanshi (71-68) was the highest-placed among the Pune-based golfers as he was tied 20th at even-par 139.

The halfway cut was declared at four-over 143. Fifty-nine professionals and all the three amateurs in the field made the cut.
The other Pune golfers who made the cut were Aditya Bhandarkar and amateur Rohan Dhole Patil (both tied 43rd at three-over 142) as well as Pratik Nirmale (tied 52nd at four-over 143).

The two other amateurs who made the cut were 14-year-old Australian of Indian origin Aarav D Shah (tied 20th at even-par 139) and Delhi’s Krishnav Nikhil Chopraa (tied 34th at two-over 141).

The heavy overnight rain resulted in waterlogging in some parts of the course. As a result, hole No. 5 was reduced from a Par-4 to a Par-3. Therefore, the par for the course in round two was 69 instead of the regular 70.

Earlier in the day, the thirty players who had not completed their first-round on Wednesday came out and finished their round. Subsequently, round two got underway. There was a one-hour delay in the commencement of play in the morning due to wet conditions. Today, the play commenced at 8 am local time.

Kartik currently 25th in the PGTI Order of Merit, was one-under through seven holes before his round just seemed to take off with his 30-feet birdie conversion on the eighth. He picked up shots on the next four holes to make it five birdies in a row till the 12th .
He ended his round with another flurry of birdies on the 15th, 16th, and 18th making a couple of more long conversions and an up and down from a tough spot in the rough on the closing hole.

“The starting stretch is a difficult one so I’m glad that I got two pars and two birdies there. I then holed a really good putt on the eighth which got my round going. I knew at that point that I’d got the putter rolling and if I can just stay in the moment and take it one shot at a time from there on, I can end up with a good score." the 21-year old Gurugram golfer said

Chadha regularly landed it within five feet to pick up four birdies. His tee shot on the par-3 second hole stopped just two feet from the pin.  Abhijit also made a good par save after recovering with a chip-putt from the rough on the seventh. Chadha has not dropped a shot since his bogey on his opening hole in round one.

“I played some steady golf today and didn’t make too many mistakes. I kept myself in play. The greens were playing differently today since there was no rain. The speed of the greens was variable so it was tough to make putts especially from a range of 10 to 15 feet. However, I dealt with the conditions well.”  said Chadha.