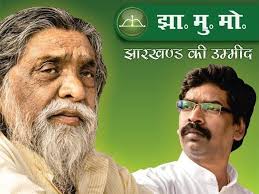 Father and son will lead the ruling party in Jharkhand till 2024.This is clear from the fact that Shibu Soren who is hailed as "Disom Guru", was re-elected Jharkhand Mukti Morcha (JMM) president for the 10th time in a row during the party's 12th triennial convention at Ranchi’s Sohrai Bhavan on Saturday.

His son  and chief minister Hemant Soren, was declared  working president for a second consecutive term.

Both Shibu Soren, a Rajya Sabha MP,  and Hemant, CM,will be in office for the next three years.

Addressing the convention, Hemant said that the party would continue to fight for "jal, jungle and jameen" and for sustainable development of the state, including moolvasis, poor and the marginalised.

Party workers from all districts of the state,  besides those from neighbouring Bihar, Odisha and West Bengal attended the convention where the party passed several political resolutions aimed at consolidating the party in its command areas, and fight the BJP and its "anti-people" policies.

On dissension within the JMM, he advised party members to discuss with him as his "doors are always open" for  hearing issues. “Anyone with any issues or with suggestions is always welcome (to discuss issues with me) rather than discuss them in the media or social media,” he said.

During the convention, it was also decided to reduce the number of JMM vice-presidents to 11 from 15, trim the number of general secretaries to 9 from 12, and reduce  the member of  central committee members to 351 from 451.