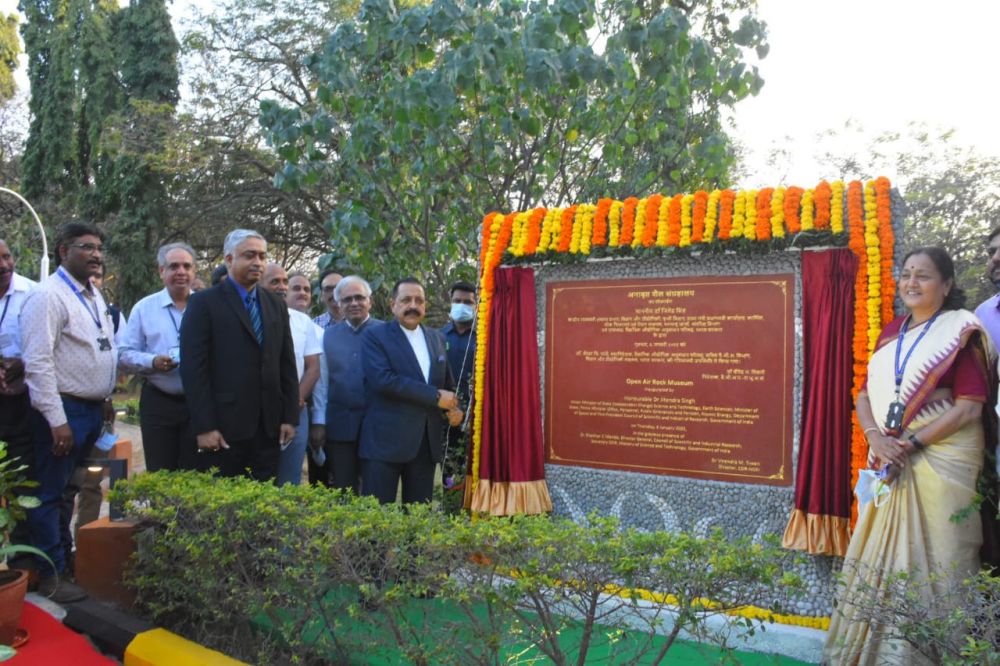 The Open Rock Museum, set up with the aim to educate and enlighten the masses about several lesser known facts, displays around 35 different types of rocks from different parts of India with ages ranging from 3.3 Billion years to around 55 Million years of the Earth’s history. These rocks also represent the deepest part of the earth up to 175 kms of distance from the surface of the earth.

Addressing the galaxy of eminent scientists, Dr Jitendra Singh said that “Big Earth data” occupies the strategic high ground in the era of knowledge economies and India is fully exploiting this new frontier contributing to the advancement of Earth science. He said, geosciences is contributing significantly towards the self-reliance and national priorities in New India.

The Minister said, Science blended with creative innovation brings “ease of living” for the common man and Scientists should adopt out of box thinking to address the problems of the common public. He said, the expectations of society from scientists are ever growing and scientists should continuously be involved in providing the best S&T solutions.

Dr Jitendra Singh said that the out of box idea was suggested by Prime Minister Narendra Modi, who not only has a natural predilection for science but is also forthcoming in supporting and promoting science and technology-based initiatives and projects.

Dr Jitendra Singh said, when country is celebrating 75 years of Independence as “Azadi Ka Amrit Mahotsav”, CSIR is celebrating 80 years of its foundation and it is the right time that all ministries and departments who are pursuing science should explore S&T innovations for making India self-reliant in many of the sectors. He emphasised that India should be a global leader in matters ranging from defense to economics with strong scientific and technological inputs in another 25 years when India celebrates 100 years of Independence.

Referring to CSIR-NGRI's future research efforts designed for Deep-Earth and Near-Surface explorations, which are critical to understand the processes responsible for shaping Earth’s structure and dynamics, and for sustenance of life on Earth, respectively, Dr Jitendra Singh expressed hope that with its charted vision and mission, CSIR-NGRI will play a vital and pivotal role in coming years to fulfill the aspirations of the nation.
It may be recalled that Dr Jitendra Singh launched state-of-the-art Heli-borne survey technology for groundwater management, developed by CSIR-NGRI Hyderabad with Union Minister for Jal Shakti, Gajendra Singh Shekawat from Jodhpur in October, last year. To start with, the States of Rajasthan, Gujarat, Punjab and Haryana are being taken up for this latest heli-borne survey, the Minister added.
Dr Jitendra Singh said that the water technologies of CSIR from source finding to water treatment will benefit millions of people across the country and positively contribute to Prime Minister Narendra Modi’s “Har Ghar Nal Se Jal”. He said, the latest state-of-the-art technology is being employed by Council of Scientific & Industrial Research (CSIR) for mapping groundwater sources in arid regions and thus help utilise groundwater for drinking purposes.

Dr Jitendra Singh also released Earthquake Risk Maps of Lucknow and Dehradun Cities and handed over the maps to the Chairpersons or nominees of UPSDMA and UKSDMA on the occasion. He informed that CSIR-NGRI has made earthquake risk maps for Lucknow and Dehradun cities which are vulnerable for future earthquakes in the Indo-Gangetic plains area. The risk maps were prepared by characterising the hazard and its uncertainty, to serve as input for risk assessment and earthquake resistant design for different applications – ranging from private homes to multi-storied buildings and critical infrastructures such as bridges or dams, he added.

Both the maps were shared with Uttarakhand and Uttar Pradesh State Disaster Management authorities who are the main stakeholders. They agreed to use the outcome for revising land use maps with revised hazard components and revise building bye-laws to outlaw unsafe and vulnerable typologies of houses in both the cities.