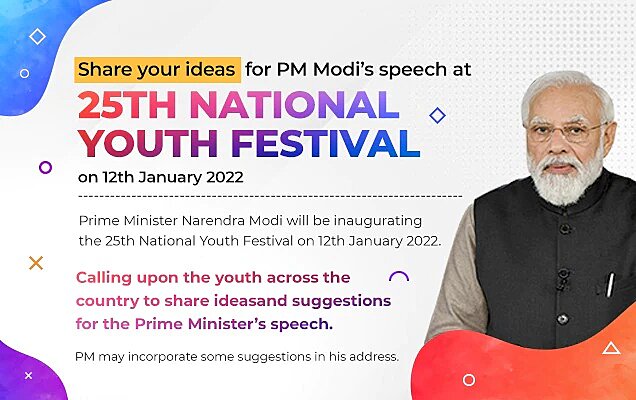 Prime Minister Shri Narendra Modi will inaugurate the 25th National Youth Festival on 12th January 2022 at 11 AM in Puducherry, via video conferencing.  The day, being the birth anniversary of Swami Vivekananda is observed as National Youth Day.

The Festival aims to shape the minds of India's youth and transform them into a united force for nation-building. It is one of the biggest exercises in social cohesion and intellectual & cultural integration. It aims to bring diverse cultures of India and integrate them into a united thread of 'Ek Bharat, Shreshtha Bharat'.

This year, in view of the emerging Covid situation, the Festival has been scheduled to be held virtually from 12 - 13 January 2022. The inauguration will be followed by the National Youth Summit wherein there will be panel discussions on four identified themes. In line with the youth-led development and motivating youngsters to solve the emerging issues and challenges, the themes will include environment, climate and SDG led growth; tech, entrepreneurship and innovation; indigenous and ancient wisdom; and national character, nation-building and homegrown.  Recorded video capsules of Puducherry, Auroville, Immersive City Experience, indigenous sport games & folk dances etc. will be shown to the participants during the Festival. There will also be open discussions with Olympians & Paralympians followed by live Performances in the evening. A virtual Yoga session will be organised in the morning.

Prime Minister will also inaugurate a Technology Centre of the MSME Ministry, established at Puducherry with an investment of about Rs. 122 crore. With a focus on the Electronic System Design & Manufacturing (ESDM) Sector, this Technology Centre will be equipped with the latest technology. It will contribute towards skilling youth and will be able to train around 6400 trainees per year.

Prime Minister will also inaugurate the Perunthalaivar Kamarajar Manimandapam - an auditorium with open-air theatre, constructed by the Government of Puducherry at a cost of about Rs 23 crores. It would primarily be used for educational purposes and can accommodate more than 1000 people.