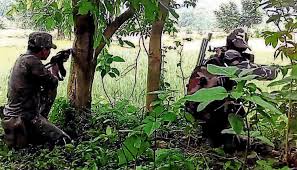 Two incidents of violent clash between the Naxals and Security Forces have occurred. This time beyond the boundaries of Jharkhand.

In these incidents, five Naxals, including two woman, were killed. The security forces described both incidents as “ encounters.”

First incident took place in the Suka district of Chhattisgarh. Here “a dreaded woman ultra, carrying a reward of Rs 5 lakh on her head, was gunned down during the gunfight between Naxals and the personnel belonging to the District Reserve Guard (DRG) from the Sukma, Dantewada and Bastar”, disclosed PTI.

Second clash took place in the forests along the border of Chhattisgarh and Telangana in the morning hours on Tuesday.

The PTI report quotes Inspector General of Police (Bastar range) Sundarraj P as saying “A team of special anti-Naxal Greyhounds unit of neighbouring Telangana police had launched a counter-insurgency operation along the forest of Bijapur (Chhattisgarh) and Mulugu (Telangana) districts after receiving inputs about the movement of Maoist leader Sudhakar along with 40 armed Naxal cadres in the area."

Inquiry revealed that a joint team of Chhattisgarh’s District Reserve Guard (DRG) and Central Reserve Police Force (CRPF) from Bijapur was carrying out “operation” and had sealed the area.

Tuesday morning at around 7 AM, the Greyhounds team got engaged in a gunbattle with ultras in a forest near Semaldodi village (Bijapur) and Penugolu village (Mulugu). Later, the bodies of four ultras were reportedly recovered from the spot. A Greyhounds constable is learnt to have sustained injuries, following which he was airlifted to Warangal in Telangana where he was admitted to a hospital. His condition is reported to be “ out of danger.”

Reports said this afternoon that the search operation was still underway in the area, located over 450 km away from the Chhattisgarh capital. In the Sukma district, woman Naxal, identified as ‘Munni’, was killed in the encounter with security personnel.