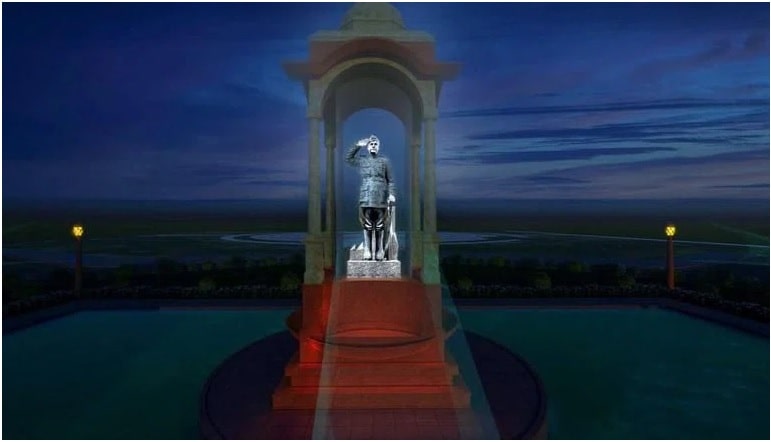 First-ever of its kind in India, the hologram statue of Netaji will adorn Rajpath till the time, a concrete, granite-made statue is carved to take its place.Picture Text courtesy merepublicworld.com

As the whole nation is celebrating Parakram Diwas on the occasion of the 125th birth anniversary of Subhash Chandra Bose, Prime Minister Narendra Modi is installing his statue at the India Gate in New Delhi.

The PM tweeted: “At a time when the entire nation is marking the 125th birth anniversary of Netaji Subhash Chandra Bose, I am glad to share that his grand statue, made of granite, will be installed at India Gate. This would be a symbol of India’s indebtedness to him.”

Earlier, in a notification, the Centre on Tuesday had announced that January 23 will be observed as Parakram Diwas every year.

As the month of the new year 2022 began, an 85-member panel, headed by PM Modi was formed to commemorate the 125th birth anniversary of Netaji Subhas Chandra Bose.

A statement said that the committee will lend guidance to the commemoration activities in Delhi, Kolkata and other places associated with Netaji and the Azad Hind Fauj, both in India as well as overseas.

The committee will decide on the activities for a year-long commemoration, beginning on January 23, 2021, a statement from the Ministry of Culture said.