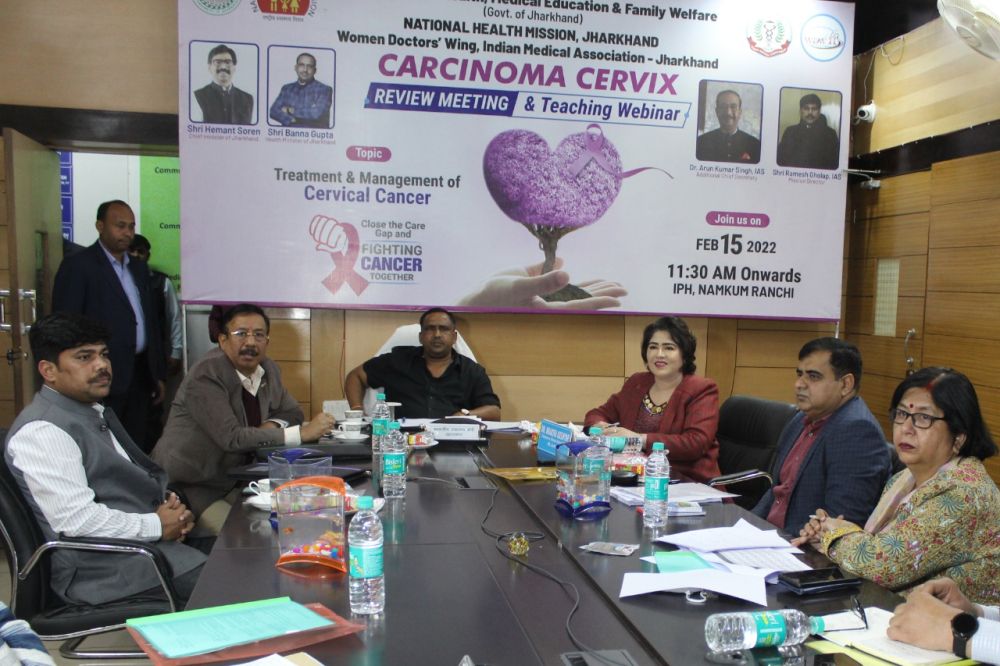 For seven long years,the Women Doctors Wing, IMA Jharkhand wanted  that the state government to equip hospitals with machines and devices to treat
cervical cancer and bring awareness among vulnerable women in Jharkhand.

Today,many of these women doctors were in cheers as the Jharkhand Health Minister Banna Gupta announced that the government has sanctioned Rs 1.32 crore in the upcoming annual Budget 2022 for equipping the State-run district hospitals with cervical pre cancer detection and treatment machines.

In consequence, if the project is implemented in letter and spirit as per announcement made by the Minister,Jharkhand will be the first State in India to have digital video colposcope and cryo facility for cervical cancer screening and treatment in all government run hospitals in Jharkhand.

This is widely attributed to the initiative of Women Doctors Wing IMA Jharkhand.In any case,a review meeting through video conference on “Screening of Carcinoma Cervix” was held on Tuesday under the chairmanship of Health Minister, Banna Gupta in collaboration with Women Doctors Wing IMA, Jharkhand who made the announcement there.

In this meeting, all the civil surgeons of the State, government gynecologists, hospital managers and deputy superintendents of all the districts were connected online. National President of IMA Dr. Sahajanand Singh praised the coordinated efforts of Health Department, Government of Jharkhand and Women Doctors Wing and said that this initiative is “exemplary for other states as well.

During the video conferencing, Dr Deepawali, the nodal officer in charge of the Maternity Cell, said that the target was to screen 2,25,571 women from April 2021 to January 2022, which is 6 per cent of women of reproductive potential. She presented the report of Cervical Cancer Screening done by all the government hospitals in the State.

Women Doctors Wing I.M.A. Jharkhand President Dr. Bharti Kashyap informed that hands-on training on machines is being imparted by the Women Doctors Wing in frequent webinars and health camps. As many as 89,541 women have been screened for cervical cancer in the last 9 months by trained government gynaecologists.

“In order to assess the exact status of cervical cancer in Jharkhand, I suggested that the monthly data of Carcinoma Cervix from all government district hospitals should be collected from NRHM”, said Dr Kashyap.

Additional Chief Secretary, Health, Arun Singh said that District Action Plan would be prepared which would work on all three issues, awareness training and treatment. For its implementation, committees will be formed in every district, in which government doctors as well as members of women doctors wing IMA at district level will also be there.

Health Minister, Banna Gupta said that the government has made a provision of Rs. 1 crore 32 lakh in the budget and digital video colposcope and cryo machine will be installed in all district hospitals of the State.