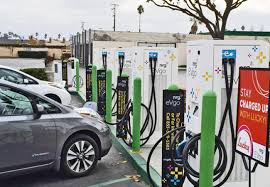 Union Power Ministry today made it clear that Electric Vehicles will have no problem concerning requirement for charging stations in major cities and National Highways in India.

In a statement released for the media, Power Ministry Saturday said that  Electric Vehicles (EV) charging stations have expanded by two-and-a-half times across nine mega cities, including Delhi, Mumbai and Chennai.

According to the statement, additional 678 public EV charging stations were installed between October 2021 and January 2022 in these nine cities. About 940 of India's 1,640 public EV chargers are located in these cities.

Notably, the government has increased its focus initially on the nine mega cities with population of over 4 million.

Also, oil marketing companies have announced the setting up of 22,000 EV charging stations in prominent cities and on national highways across the country.

The Department of Heavy Industry has recently sanctioned 1,576 public charging stations for 25 highways & expressways which shall be located within every 25 km of range on both sides of these highways, said a PTI report.