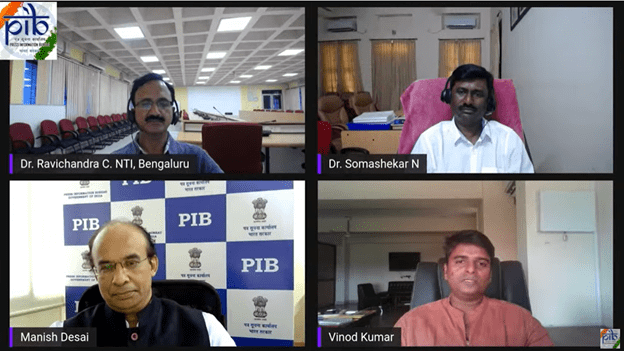 ‘Invest to End TB. Save Lives!’ With this slogan, an attempt has been made by NTI to build public awareness of tuberculosis.

It is based on the theme of World Tuberculosis Day 2022.It is being observed on 24th March 2022. Dr. Somashekar. N, Director, National Tuberculosis Institute (NTI), Bengaluru and Dr. Ravichandra C., Chief Medical Officer (SAG), NTI Bengaluru as expert speakers threw light on various aspects of the disease, which all of us need to be aware of.

Insights from the interaction:

Tuberculosis is caused by a bacterium known as Mycobacterium Tuberculosis. Most often, it affects the lungs. The disease can easily spread from the infected person’s cough droplets; this makes it a highly infectious disease. If not treated on time, TB can even result in death.

The incidence of TB is quite high across the world. Out of the total cases, more than 26% are from India. This includes both multidrug-resistant TB and HIV TB cases.

TB infection is not the same as TB disease, explains Dr. Ravichandra C.

Low immunity is regarded as one of the common reasons why TB infection breaks into TB disease. People suffering from HIV, stress, diabetes, damaged lung conditions; alcoholics and smokers whose general health condition is poor also have the possibility of getting the disease. It is at this stage that they start showing symptoms.