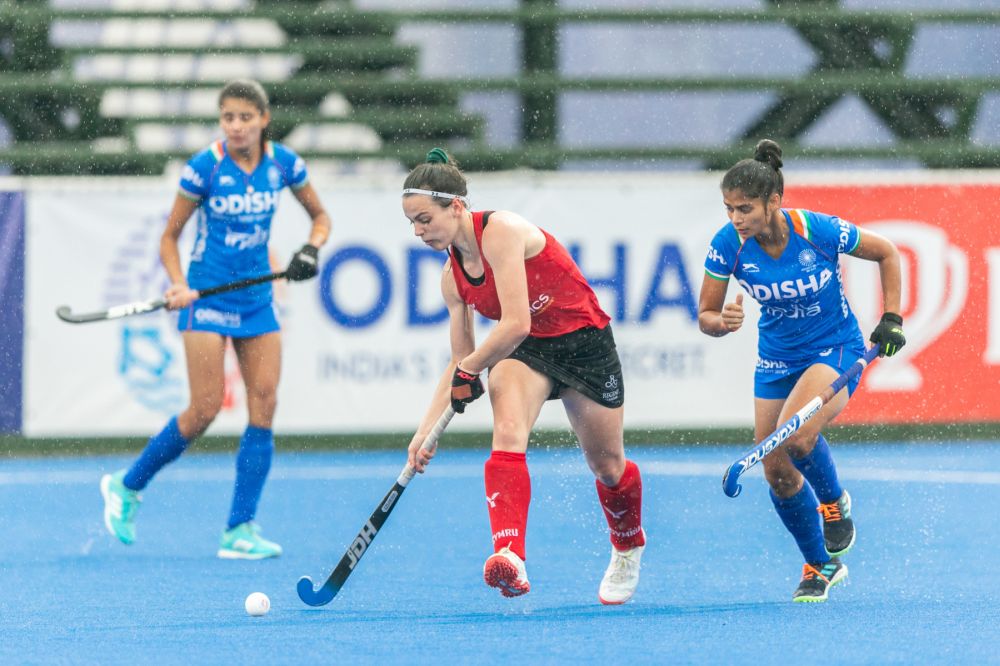 India overpowered Wales  5-1 to commence their campaign at the Hockey Women's Junior World Cup on a winning note at Potchefstroom (South Africa) on Saturday,

India led by Salima Tete opened with a swift attack in the first quarter, creating a penalty corner within a few seconds of the start of the match. But the Wales goalkeeper Ffion Horrell was quick to respond with a good save.

India surged ahead in the 4th minute through Lalremsiami's deflection that beat the Wales goalie. While Wales too won a PC in the first quarter, but goalkeeper Bichu Devi made a superb save. .

Though India dominated the second quarter but the forwards, who created potential goal-scoring opportunities, could not quite put the ball past Wales' defence led by Horrell .

Though against the run of play  Wales drew parity in the 26th minute through Millie Holme, India made amends to their slow second quarter by bouncing back stronger in the third and the fourth quarters.

While Wales began the third quarter by earning a PC, goalie Bichu Devi ensured they did not score from this opportunity.  Two minutes later, India pumped a goal when Lalrindiki got a perfect deflection off Salima Tete's assist. Later, Mumtaz Khan took the scoreline to 3-1 as she converted a brilliant field goal in the 41st minute.

Meanwhile, Lalrindiki,  was again at the center of all the action when she fetched India another PC with just three minutes left for the third quarter to end. But the chance could not be converted with Horrell coming up with yet another fine save.

In the final quarter, India put up an improvised attack and in the 52nd minute they won another PC, Horrell yet again blocked away from the shot. But with just a little less than four minutes left for the final hooter, Deepika helped win another PC. Even though Horrell saved the shot, Ajmina Kujur took another shot from the rebound, which was saved again by Horrell.

Lalrindiki was quick to respond as she picked up the rebound and found the gap in India's third attempt. This helped extend India's lead to 4-1 while another PC in the 48th minute which was converted by Deepika, helped fetch India their first win with a  5-1 scoreline.

"I am very proud of the way we played today. We got off to a good start but gave away chances in the second quarter. I am particularly happy about how we came back into the game in the third and fourth quarter, finishing it off really well. We play Germany tomorrow, a strong team but today's win will give the team good confidence."  Said Salima Tete after the victory