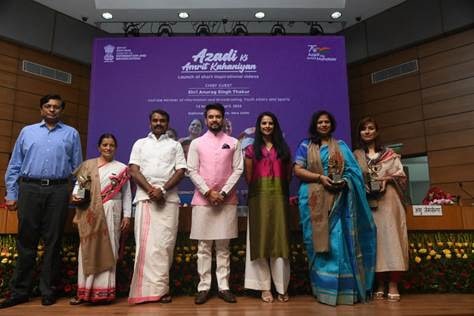 ‘Azadi Ki Amrit Kahaniyan’ is an iconic initiative which brings out beautiful stories of inspirational Indians on various themes including Women Empowerment, Environment & Sustainability, and others. The diverse set of stories seek to motivate and empower Indians from every corner of the country.

The Ministry and Netflix have collaborated to produce the first set of videos featuring seven Women Change makers from across the country who share their experiences in breaking the glass ceiling. They are demonstrated as ‘forces of nature’ as they speak about what Azadi means to them. Showcasing the unique diversity of India, these two minute short films were shot in locations across the country and are narrated by acclaimed actor, Ms Neena Gupta.

The Seven Changemakers also include Ms. Poonam Nautiyal, a healthcare worker who walked miles across Bageshwar district in Uttarakhand to vaccinate everyone; Dr. Tessy Thomas, the first woman scientist to head a missile project in India; Ms. Tanvi Jagadish, India's first competitive woman stand-up paddleboarder and Ms. Aarohi Pandit, the world's youngest and first woman pilot to cross the Atlantic Ocean and the Pacific Ocean solo in a light-sport aircraft.

Three of the videos, featuring Ms. Basanti Devi, Ms. Anshu and Ms. Harshini; and a trailer offering a sneak peek into the series, were released today. With a focus on highlighting and honouring the exemplary women, the three Changemakers were felicitated by Shri Anurag Thakur, who lauded their efforts of empowering women across the country and leading by example.