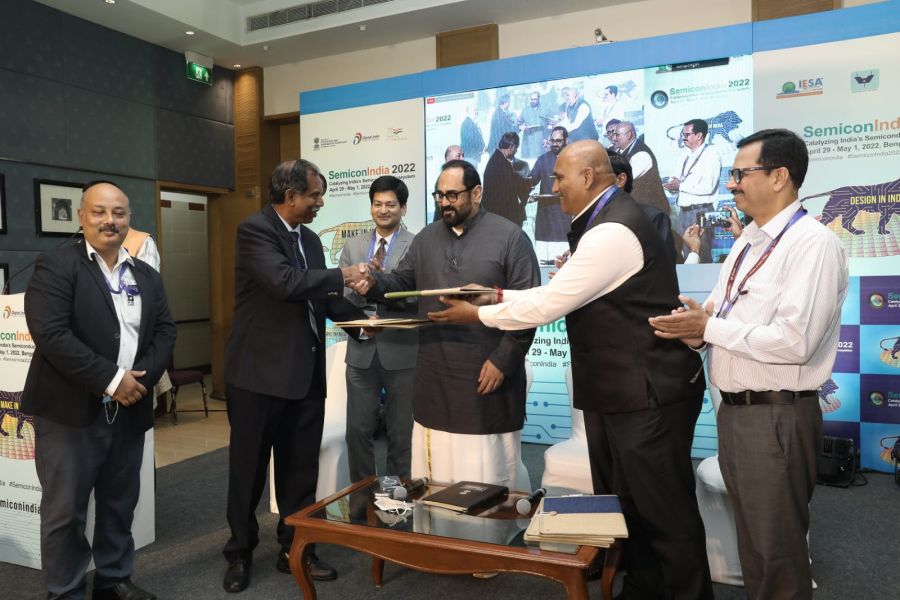 With an aim to turn India into a thriving semiconductor hub kick-started with multiple Memorandum of Understanding (MoUs) signed between the Government, leading semiconductor industry players and industry associations.

Notably, it is a declared vision of the Prime Minister of India Shri Narendra Modi to make India as a hub of the semiconductor industry.

Now India is fast turning into a thriving semiconductor hub. It kick-started with multiple Memorandum of Understanding (MoUs) signed between the Government, leading semiconductor industry players and industry associations.

“The wheels were set in motion to Catalyze India’s semiconductor ecosystem, today, as design and co-development pacts were announced at SemiconIndia 2022. Recently India has announced the DIR-V Program to develop Siliconize and create design wins for future around SHAKTI and VEGA RISC-V Processors”, said a press statement issued by the GoI today.

DIR-V Program with Prof. Kamakoti, Director, IIT Madras as Chief Architect and Shri Krishna Kumar Rao as Program Manager has been initiated with a vision to make India not only a RISC-V Talent Hub for the World but also supplier of DIR-V solutions for Servers, Mobile devices, Automotive, IoT & Microcontrollers across the globe.

DIR-V has announced Five MoUs for the use of indigenously developed RISC-V Processors -SHAKTI and VEGA.

SEMI, USA and IESA also announced an MoU for exploring the potential for growth of Electronics and Semiconductor industry in India and thereby bring global major players in semiconductor to leverage the opportunities for catalyzing the semiconductor ecosystem in India. IESA also released an industry report - India Semiconductor Market Demand.

Shri Rajeev Chandrasekhar, Minister of State for Electronics & Information Technology and Skill Development & Entrepreneurship, said,” There has been an exponential growth in electronics production in India. The sector has grown to fulfill domestic demand and to export globally. This is fueling demand for microprocessors and chips. The time is ripe for India to rise and take up this challenge head on.

Our startup ecosystem is replete with some of the best minds in technology and I am confident that our startups will drive the next wave of innovation, leading India’s digital economy. Our design and innovation ecosystem are robust and thriving and I am certain our next wave of unicorns will be from this sector.”

The second day of the conference also had invigorating sessions and discussions with global and Indian technocrats. Mr. Siva Sivaram, President – Western Digital addressed a rapt audience and spoke on India’s resilience to Semiconductor Supply Chain. Raja Koduri, Chief Architect and Senior Vice President, Intel’s IAGS division delivered a talk on “From Angstroms to Zetta-scale: Silicon, Systems and Software in India”. The session covered the real potential in AI, System Design & middleware for Indian Startups. Mr. Akarsh Hebbar, MD, Avanstrate delivered a session on Indian Opportunities in Integrated Semiconductor and Display. He emphasized on the role of semiconductor sector given the rise in demand and projected growth in the sector in the coming years. Upcoming technologies such as 5G will further boost demand and this sets up India perfectly to build an ecosystem that can cater to local demand and also reach Indian chips and microprocessors across the globe.