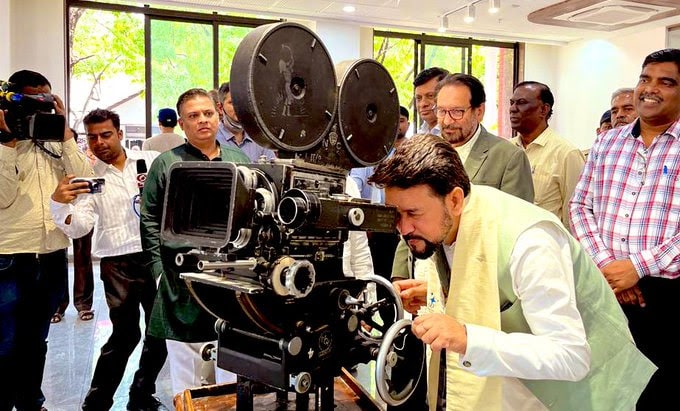 To prioritize preservation, protection & promotion of India’s rich cultural heritage, and films constitute an important part of this heritage is the vision of Prime Minister Narendra Modi.

This is the view of the Union Minister of Information & Broadcasting Shri. Anurag Singh Thakur. He expressed his view during his visit to the National Film Archive of India, Pune on Thursday.

highlighted that the National Film Heritage Mission launched in 2016 is aimed at preserving, restoring and digitizing our cinematic heritage. In this context, the Union Minister announced that a decision has been taken yesterday that, “Out of the total outlay of Rs. 597 crore earmarked for this Mission, Rs. 363 Crore shall be utilized exclusively for restoration purpose, making it one of the World’s largest film restoration projects”.

He informed that the process of restoring over 5900 short films, documentaries and features is underway and this exercise carried out by NFAI proves to be one of the world’s biggest restoration, conservation, preservation and digitization process undertaken.

Union Minister Anurag Singh Thakur also released the Hindi edition of Lensight, the academic journal of FTII. The Minister was given a tour of the Institute.

While interacting with Heads of Departments, the Minister urged the faculty to keep upgrading themselves and bring partners from industry to FTII. He also emphasized the larger outreach activities and partnerships with organizations to run courses in film and television production in various parts of the country. Chairperson, FTII, Shekhar Kapur; I&B Secretary Apurva Chandra; Director FTII, Sandeep Shahare and other officials of the Institute were also present.