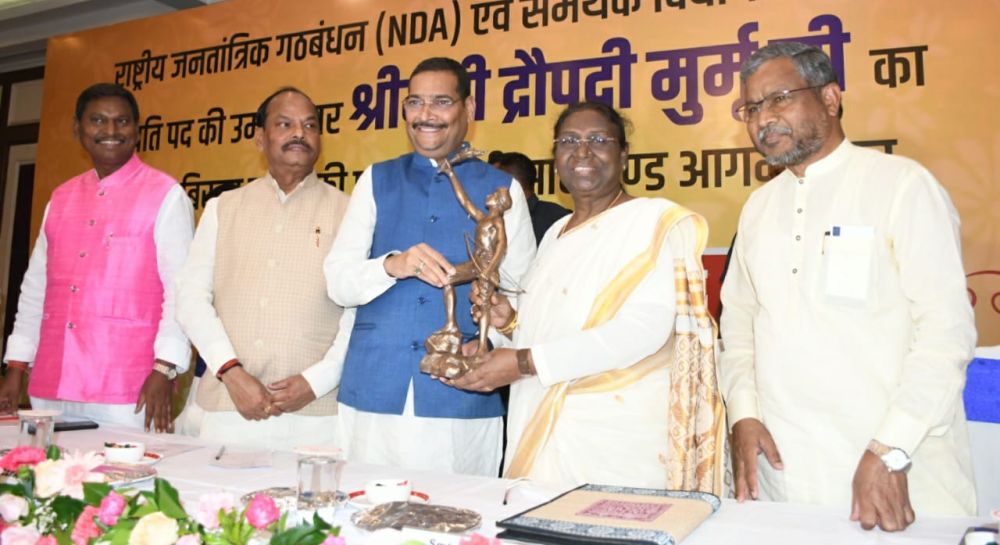 National Democratic Alliance's (NDA) presidential candidate Droupadi Murmu landed in Jharkhand’s Ranchi today for campaigning the presidential election which is scheduled to be held on July 18.

During her visit to the state capital, Murmu was welcomed by all senior Bharatiya Janata Party (BJP) leaders including Union Minister Arjun Munda and two Ex-Chief Ministers Babulal Marandi and Raghubar Das as well as their ally AJSU party chief Sudesh Mahato in a meeting held inside the auditorium of the star hotel BNR Chanakya.

Murmu is going to meet the JMM supremo Shibu Soren and Chief Minister Hemant Soren who have already indicated to support her presidential candidature. Murmu and Sorens belong to a common tribal community of Santhals.

Notably, Murmu’s rival Presidential candidate of the Opposition including TMC and the Congress, Yashwant Sinha who has a residence in Jharkhand’s town Hazaribagh has not visited Jharkhand so far.

From Ranchi, she is slated to go to Patna in Bihar on July 5. Already, preparation for her welcome is in full swing in Patna by the Bihar BJP state unit of the BJP and JD(U).

Earlier on Saturday (July 2), Murmu had visited Puducherry to seek support from the legislators of the ruling AINRC-led coalition in the Union Territory. She met Puducherry Chief Minister N Rangasamy and sought support for her candidature in the presidential election.

The elections for the President of India will take place on July 18 and the results will be out on July 21. The term of President Ram Nath Kovind concludes on July 24.