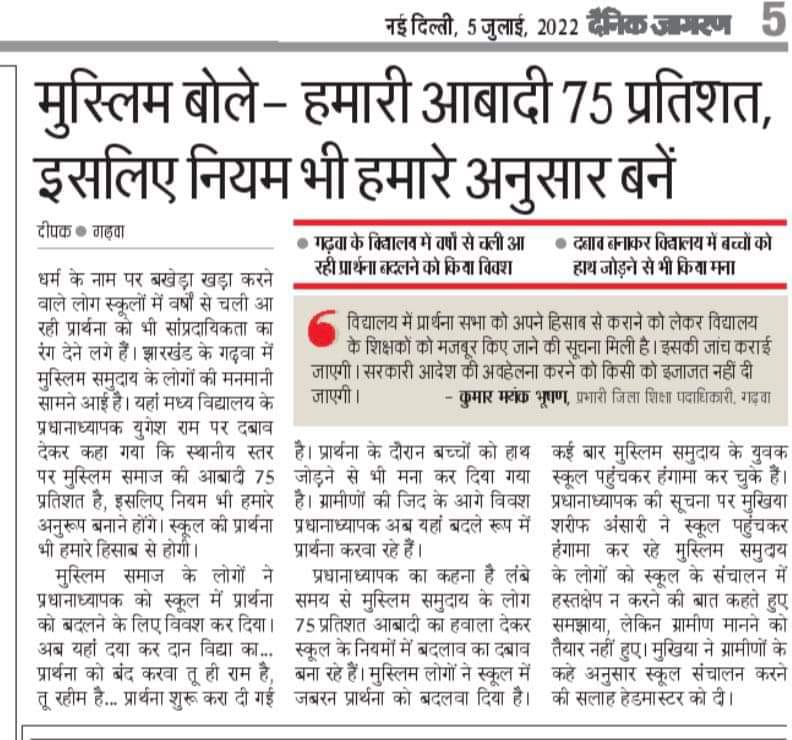 *A copy of the Dainik Jagran report is being enclosed for viewers perusal.

BJP state unit Youth Wing has demanded legal action against a group of the minority community who had allegedly compelled the principal of a school in the village of Garhwa district to get the school prayer changed on religious grounds.

“The school education and practice adopted for imparting education to children have to be regulated by the government. No community or its members have any right to get prayer and practice to offer pranam, a feature of the educational guideline”, said Ritesh Singh, BJP’s youth wing - Yuva Morcha-leader in Jharkhand.

Singh’s press release was in repose to a July 5 report in Hindi daily Dainik Jagran. It has been stated that in a village in Jharkhand’s Garhwa district, some members of the Muslim community got a school prayer, that has been offered for years, changed on the ground that they were in majority and as such their advice will have to be followed.

The report said that since “Muslim community forms 75% of the population”, the prayer should be ‘as per their suggestion’. The school administration also succumbed to the pressure and changed the prayer, the report claimed.

The same report further states that the Muslim community also objected to holding hands during prayer and got the same to stop. Incidentally, Hindus fold their hands while offering prayer, greeting in ‘namaste’ and bow down their head as a mark of respect. The school administration said that for the past few months the people from the Muslim community have been coming and creating a ruckus demanding a change of prayer.

The report further states that on request of the school principal Yugesh Ram, the head of village Sharif Ansari asked the Muslim youth to not create a ruckus on school premises. But the people from the Muslim community did not agree. Subsequently, the head of the village, Ansari, passed on the instructions of local residents with regard to the prayer.

The government administration has reportedly been made aware of the local Muslim residents of the village forcefully getting the school prayer changed. The administration has said an investigation regarding the same will be carried out.