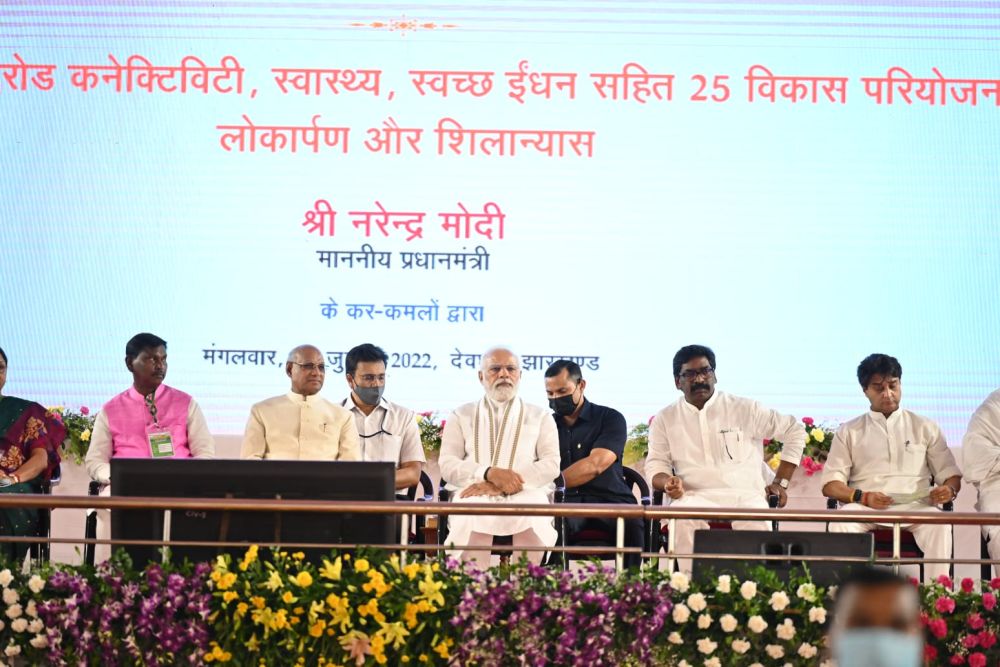 *Projects will significantly boost infrastructure development, enhance connectivity and give an impetus to ease of living in the region*

*“When a holistic approach guides projects, new avenues of income come for various segments of the society”*

*“We are taking many historic decisions for converting deprivation into opportunities”*

*"When steps are taken to improve the ease of life for common citizens, national assets are created and new opportunities of national development emerge”

Addressing the gathering, the Prime Minister said that with the blessings of Baba Baidyanath, projects worth more than Rs 16,000 crore have been inaugurated and the foundation stone has been laid today. These are going to give a huge impetus to Jharkhand's modern connectivity, energy, health, faith and tourism.

The Prime Minister said that today, Jharkhand is getting its second airport. This will lead to tremendous ease for devotees of Baba Baidyanath. In the context of making air travel affordable for the common man through the UDAN scheme, the Prime Minister noted that today the benefits of the efforts of the government are visible across the country.

About 70 new locations have been added through airports, heliports and water aerodromes in the last 5-6 years under the UDAN scheme. Today, ordinary citizens are getting the facility of air travel on more than 400 new routes. More than 1 crore people have experienced very affordable air travel, many for the first time. The Prime Minister expressed happiness that the flight from Deoghar to Kolkata started today and flights for Ranchi, Delhi and Patna will start soon. Work is on for airports in Bokaro and Dumka, he said.

The Prime Minister said along with connectivity, the central government is also focussing on the creation of facilities at important places related to faith and spirituality in the country. Modern facilities have also been expanded in Baba Baidyanath Dham under the PRASAD scheme. When a holistic approach guides the projects, new avenues of income come for various segments of the society and new facilities create new opportunities.

The Prime Minister also highlighted the benefits of the country’s effort to enhance the gas-based economy for the state of Jharkhand. He said that PM Urja Ganga Yojana is changing the old picture. “We are taking many historic decisions for converting deprivation into opportunities', he said. The Bokaro- Angul section of Jagdishpur-Haldia-Bokaro-Dhamra pipeline of GAIL will expand the city gas distribution network in 11 districts of Jharkhand and Odisha.

The Prime Minister said we are following the mantra of Sabka Saath, Sabka Vikas, Sabka Vishwas and Sabka Prayas. New avenues of development, employment-self-employment are being discovered by investing in infrastructure. We have laid emphasis on aspiration for development, focused on aspirational districts, he said, underlining the benefits of these initiatives for Jharkhand.

He said most of the 18,000 villages which were electrified so long after independence are in inaccessible and remote areas.Government has worked in mission mode in the last 8 years to bring tap water, roads and gas connection, he said.

Referring to the spread of modern facilities beyond big cities, the Prime Minister said that these projects are proof that when steps are taken for improving ease of life for common citizens, then national assets are created and new opportunities of national development emerge. “This is the right development and we have to collectively accelerate this development”, he said.

As a key step to provide direct connectivity to Baba Baidyanath Dham, which is an important religious destination for devotees from all over the country, the Prime Minister inaugurated the Deoghar Airport. It has been constructed at an estimated cost of around Rs. 400 crore. The Terminal Building of the airport is equipped to handle over five lakhs passengers annually.

Prime Minister’s commitment to develop world class infrastructure at places of religious importance across the country and improve facilities to the tourists in all such places, will get a further boost as the components of project “Development of Baidyanath Dham, Deoghar” sanctioned under the PRASAD Scheme of the Ministry of Tourism will get inaugurated.

The projects being inaugurated by the Prime Minister include development of two large pilgrimage congregation halls with a capacity of 2000 pilgrims each; Jalsar lake front development; Shivganga Pond development among others. The new amenities will further enrich the tourism experience for lakhs of devotees who visit Baba Baidyanath Dham.

The Prime Minister inaugurated and laid the foundation stone of multiple road projects worth more than Rs. 10,000 crores. The projects that were inaugurated include six laning of Gorhar to Barwada section of NH-2; widening of Rajganj - Chas upto West Bengal border section of NH-32 among others.